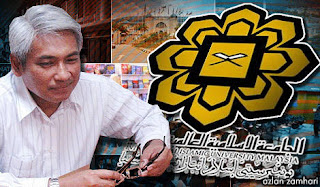 In a hard-hitting statement today, Asri, who is an associate professor in theology, said the suspension was both “embarrassing” and “uncivilised”.

Worse still, Asri said, the action of the UIA administration was an act of “brown-nosing” and a step into the “Catholic dark ages”.

“The actions taken against (Abdul) Aziz are something that embarrass our academic world (which) have no basis in knowledge, as in this world each person has the right to speak based on facts.

“The action taken is an act of brown-nosing...which hurls Malaysia into the Catholic dark ages where Protestant academicians were burnt at the take and accused of treachery and heresy,” he said.

Asri(left), who is currently serving a fellowship in Oxford University, England, also raised concern that the suspension involved a “conflict of interest” as UIA rector Zaleha Kamaruddin is a member of the Selangor Islamic Affairs Council (Mais).

“As a UIA graduate, I feel that a grave mistake has been made... the university is a world class institution, but has turned into a narrow-minded religious department,” he said, cuttingly.

Mais oversees the actions of the Selangor Islamic Affairs Department (Jais). It's search in a Petaling Jaya church hall on Aug 3 was the subject of the decree by the Selangor sultan.

Abdul Aziz is under fire for comments made on the decree, which UIA said “went against the university's interests”.

UIA hung Aziz out to dry

“PKR Youth does not wish to meddle in the administration of UIA. On the contrary, the question is why there is suppression of academic freedom, which ultimately relates to the freedom of thought of lecturers who are responsible for teaching their students?

“If this happens, then the disappointing level of quality of graduates in the market should be of no surprise, as the credibility of their lecturers are in tatters due to the limited space accorded them to engage in the areas of their expertise and knowledge,” Shamsul said in a statement.

"As an international institution of higher learning, IIUM should be defending the right of its academicians to voice their opinions and ideas," Wong said.

Calling for the withdrawal of Abdul Aziz's suspension from work, she said as an institution of higher learning, UIA should encourage debate for the benefit of society instead of feeding a culture of fear.

"If a respected academician such as (Abdul) Aziz is punished for commenting on a matter related to his expertise, then all academics will be cowed into silence," the PKR-Bukit Lanjan assemblyperson said in a statement.

Meanwhile, tertiary students have also protested at the treatment accorded to the professor.

In a statement today, Solidariti Mahasiswa Malaysia (SMM) president Syukri Abd Razab expressed dismay at the university's decision, and called on other students to show solidarity for the lecturer by protesting his suspension.

"SMM will mobilise students on a large scale, from campuses throughout the Klang Valley, to demonstrate at the UIA mosque tomorrow," Syukri said, estimating that the protest would draw over 1,000 youths.

The SMM protest will be followed by one led by PKR Youth after Friday prayers. 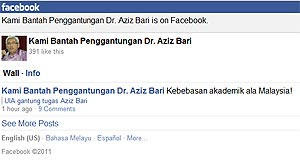