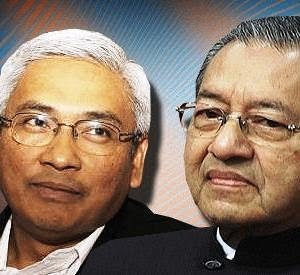 Never trust UMNO when they start talking about the Monarchy in Malaysia. Nor can we ever trust Mahathir Mohamad when it comes to commenting on the royals.

That the former prime minister came out to chide Prof Aziz Bari for being “kurang ajar” or rude when the law lecturer remarked that Royalty were not above criticism, speaks volumes about Mahathir's propensity to forget his own deeds, misdeeds and history.

In 1983, UMNO under the leadership of Mahathir Mohamad took on Malaysia’s royalty, the first of many battles. He stepped forward to introduce amendments to the constitution that would limit the Agong’s authority over Parliament.

The Agong would have to assent to a bill within 15 days of being passed and most importantly the amendments also included transferring the power to declare a state of emergency from the Agong to the Prime Minister.

The Agong refused to bend to Mahathir’s wishes and His Highness was supported by the Sultans, conservative UMNO politicians, a large minority of the Malay community and an even larger number from the Chinese community.

But Mahathir had the press on his side and took to the streets and organised mass rallies to show that public support was behind him. Ironic that none of these street rallies were deemed illegal as the July 9 Bersih rally for free and fair polls was, nor were they deemed a threat to national security or damaging to the country’s economy.

After five months, the two sides reach a compromised with the power to declare emergency still in the Agong’s hands but if a bill was not assented to by the Agong, it would be returned to Parliament which meant that parliament could over-ride the Agong’s veto. 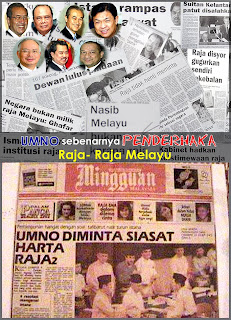 In his second decade in office, Mahathir had again found himself battling Malaysia's royalty.

In 1992, Sultan Iskandar's son, a representative hockey player, was suspended from competition for five years for assaulting an opponent. Sultan Iskandar retaliated by pulling all Johor hockey teams out of national competitions. When his decision was criticised by a local coach, Sultan Iskandar ordered him to his palace and promptly had the coach beaten.

The federal parliament unanimously censured Sultan Iskandar, and Mahathir leapt at the opportunity to remove the constitutional protection of the Sultans from civil and criminal suit.

The press backed Mahathir and, in an unprecedented action, began airing allegations of misconduct by members of Malaysia's royal families. As the press revealed examples of the Rulers' extravagant wealth, Mahathir resolved to cut financial support to royal households.

With the press and the government pitted against them, the Sultans capitulated to the government's proposals. Their powers to deny assent to bills were limited by further constitutional amendments passed in 1994 and with this Mahathir had become the country's "uncrowned king".

The fact that the International Islamic University or UIA thought it proper to suspend Aziz Bari also underscores the poor and lowly view the Barisan Nasional government has of the academicians in Malaysia. They seem to think the academia exists to rubber stamp their way of thought, their policies and politics.

Academicians are only academics if and only when they tell the version of the story that BN and UMNO subscribe to.They make no bones about putting on the screws to force the managements of the universities to bow to their will.

Shame on UIA for buckling under the pressure of politicians. If UMNO can use the excuse that its Bukit Gelugor chief Dr Novandri Hasan Basri's blog comments attacking Lim Guan Eng's son “are only his personal view”, then why can’t UIA too say that the comments of Aziz Bari were “the personal views” of the academician? - Maclean Patrick, Malaysia Chronicle