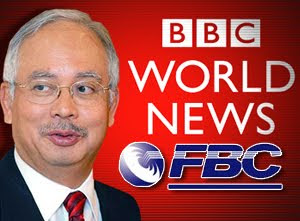 The daily reports that FBC Media and its parent company FBC Group’s affairs are now being sorted out by administrators Hillier Hopkins Corporate Recovery.

“At the end of the day, if there is money available for creditors that will be paid of by way of dividend,” administrator David Butler was reported as saying.

The daily reported Hillier Hopkins saying that the it is now trying to establish “the extent of the companies' assets in order to maximise any potential return to the ex-employees and other creditors”.

The administrators added that the circumstance surrounding the insolvency will also be investigated.

The Independent's media editor Ian Burrell also today reported that FBC's offices near London's Gray's Inn Road has had its “carpets taken up”, while phones are left unanswered.

In a written reply to the Dewan Rakyat, Prime Minister Najib Abdul Razak said that the government paid FBC Media 19.6 million Euros (RM94 million) to FBC media for the duration of three years from 2007.

The payment was for “consultancy services, advice and management of a communication campaign”.

International broadcasters CNBC,BBC and US magazine The Atlantic have all launched internal investigations into the connections with FBC.

The Independent reported today that BBC Trust is days away from considering a report prepared by the BBC executive on a series of programmes produced by FBC Media for broadcast on BBC World News.

The matter is also being probed by the UK media regulator Office of Communications (Ofcom).

FBC Media has been accused of providing editorial content on foreign subjects while doing public relations work for the same governments it was reporting on.

The UK daily had also reported that documents filed with the US House of Representatives in 2008 show that FBC contracted the Washington-based American lobbying company Apco Worldwide.

It noted that FBC had created at least four documentary series for Malaysia, including a public relations piece on the palm oil industry, treatment of natives and deforestation.

Disgusted - Looks like all this while they have been surviving by ripping of Malaysian Government via Najib. Our hard earned tax money was used frivolously by Najib to boost his and his government's image whilst he tells the very rakyat who are indirectly paying for it to tighten our belts.