According to the Auditor General 2010 report, the cases involving Malaysian food restaurants in several destinations abroad, an e-portal and other tourism products are still under probe, although some took place as far back as 2005.

Only three cases have been brought to court, with one of them involving a civil suit against Pempena.

The cases which are still "under investigation" include the Little Penang restaurant in Hyderabad, India where renovation costs were deemed too high with suspicions of cheating involved.

"Pempena admitted to suspicious elements in the investment in Awana Hyderabad and reported the matter to the Malaysian Anti-Corruption Commission (MACC) and the police in March 2009.

"The restaurant was sold without approval, knowledge or profit to Pempena. The matter is under probe," the report noted.

An investigation is also underway for the Little Penang restaurant in Beijing, for which Pempena paid RM545,864 to a partner without "signing (a contract) to protect its interests".

"The restaurant has been demolished and the investigation is underway," the report said.

Pempena's venture of opening a Malaysian restaurant in London also brought dismal results, raking in only GBP13,000 in 2007, falling far behind of its annual target of RM520,692.

"Pempena has yet to get any returns for its investments worth RM3.73 million," it lamented.

"To date, the Coca Restaurant has offered to buy over the restaurant for GBP52,000, but the offer was rejected by Pempena as it was too low." 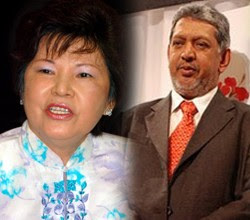 Pempena's attempt at the food and beverage business also flopped locally through the Sri Kebaya Restaurant, which along with a partner was paid RM720,271 to own a restaurant in Doha.

"To date, the partner has yet to transfer the equity holdings for the restaurant in Doha, Qatar to Sri Kebaya and for seven months, the restaurant operated at a loss amounting of RM316,785," it said.

A demand letter was sent by Pempena to the partner in September 2008 to regain RM520,271 paid to the person, but to no avail. The year 2007 proved to be an especially bad year for Pempena, having again paid a significant amount for a restaurant in Melbourne, but it never opened its doors.

"Pempena paid RM114,000 to a partner to buy 30 percent of Airnett to open a restaurant in Melbourne, Australia," it said.

The company also paid RM500,000 to LinkState Catering Pty Ltd in 2008, but the restaurant failed to take off.

The matter was reported to MACC and the police's Commercial Crimes Department on the same day as the other cases, and all are under probe.

Joining the list of failed ventures which are "still under probe" is the e-Tourism portal for which Pempena parted RM2.5 million, or half of the total bill, to a company, Virtual Malaysia Sdn Bhd.

"Virtual Malaysia could not complete the portal as Pempena failed to make the rest of the payment," the report added.

The case is still being investigated despite the case of the remainder RM2.5 million being settled out of court.

Likewise, under probe is the 2007 case where Pempena paid RM1.95 million to the company Nathena LiFZ (M) Sdn Bhd (Langkawi International Fashion Zone) for a 30 percent stake in the company.

"As the partner, Nathco Index Sdn Bhd could not provide the 70 percent capital, Pempena's equity was reduced to RM30,000 while the remainder RM1.92 million was turned into advance capital," it said.

Nathena, which offered 100 Italian brands of clothes and accessories for sale, has not reimbursed part of the advance capital demanded by Pempena amounting to RM1.74 million, but its business premises was seized by the Langkawi Development Council and sold for RM300,000.

Question marks are abound over what had happened to the RM150,000 paid by the subsidiary company for a 40 percent stake in Corporate Treasures' Malaysia Pass golf programme in 2005.

Pempena has also not accepted an offer by Malaysia Tourism Executive Sdn Bhd to buy its shares worth RM478,000 in the latter company for a mere RM10 following losses amounting to more than RM400,000.

The two cases which saw the charging of Pempena personnel was the Amir Diab Concert in the Middle East, where the subsidiary company paid the company of controversial figure Umi Hafilda Ali RM 169,770 for a concert that never happened.

Mirza, along with former Pempena chief operating officer, Mohammad Rosly Md Selamat, were also charged for involvement in Pempena's venture into a restaurant in Dubai, for which an investment of RM888,000 was made. The eatery never opened.

In 2008, Malaysiakini reported a series of dubious deals carried out by Pempena, which resulted in the investigations.

Mirror thyself - Firstly, Minister Ng Yen Yen will deny any knowledge on these losses. As usual, she will say that she will leave no stones unturned investigating. No result as investigations still always in progress.............no light at the end of the tunnel Secondly, MACC/PDRM will open files and these files will be sidelined for dust collecting.

kheng - Truth be known! Now we know why Umi Hafilda Ali has been actively discrediting Anwar and PR at recent by-elections!!

2CTS WORTH - This massive loss added to the others is colosal There is no reversible solution in sight There has to be a complete overhaul, a change in the management viz the gomen

kheng - MCA & Gerakan is so happy to shout and cry over every little spending that relates to the PR state government, especially in Penang. BUT, why are they so silent on the AG report?; are they blind to the wanton abuse of taxpayers money that costs us billions! PCs left to rot in their original packaging for 3 years until termite infested, buying electric sewing machines in Kapit where the place has no electricity supply, the losses incurred by Pempena, overspent by the Tourism ministry, baggage handling installation for KL Sentral/KLIA, etc.

Brother And Sister Of the respectfully
That YIP KUM FOOK, MCA Gombak chairman and his son Yip Jiun Hann (Youth MCA Gombak) they are not only used of power to suck Temple’s money of SAMNAK SAMBODHI BUDDHIST TEMPLE(Thai) No: 19 Jalan 38 Taman Desa Jaya, Kepong, Kuala Lumpur, Malaysia. But far worse, they are cheating women and make people family broken. They truly wicked and immoral

Bring forward. I regret that this is true, the purpose is to hope for public, and especially women take care not to be trapped by the end of sweet mouth will override of great loss and pain