Constitutional law expert Abdul Aziz Bari has agreed to debate Kulim Bandar Baharu MP Zulkifli Noordin, but only if the latter revokes his "ridiculous" condition that Abdul Aziz apologises to the Selangor sultan.

"If he is sincere, then (debate) without the condition. He hit me first. He started it, and I am a victim. If he is a fair person, then come forward without any ridiculous excuses," Abdul Aziz said.

"Why should there be a condition for me to apologise to the sultan when I don't even know where I went wrong?

"Who is he to ask me to do so? In short, stop dragging in other people, including the sultan."

Yesterday, Zulkifli had joined the bandwagon against Abdul Aziz by challenging the Universiti Islam Antarabangsa lecturer to a debate on constitutional matters.

Malay dailies Berita Harian and Utusan Malaysia reported the Independent MP as saying yesterday that he is willing to debate the law professor on constitutional matters.

However, Zulkifli told reporters in the Parliament lobby that he would only do this if Abdul Aziz first apologises to the sultan over his statements in reference to the royal decree on the Selangor Islamic Affairs Department search conducted at a dinner at the Damansara Utama Methodist Church compound on Aug 3.

"I am prepared to take on his challenge to debate, wherever he wants. But he needs to do one thing first: Apologise to the Selangor sultan, as the majority (of the people) feels that his statement questioning the decree was rude and insolent," Utusan quoted him as saying. 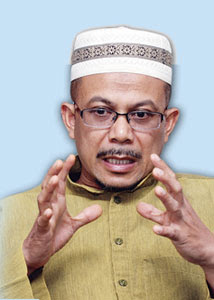 Zulkifli(right) also posed his own challenge to Abdul Aziz - to step down from his academic post and fight it out as a candidate in the next general election.

"I have no qualms and am prepared to face (Abdul) Aziz if he contests in the next general election. He'll soon find out his fate and can then pack up for his hometown of Sabak Bernam," the former PKR parliamentarian boasted.

Responding to this, the professor questioned the "relevance" of the challenge, saying his involvement in academia or politics has nothing to do with the issue.

"The debate is about his accusations about me, that I was supposedly insolent and rude to the sultan," Abdul Aziz said.

This is not the first time Abdul Aziz has been asked to quit his job in the public institution, with Senator Ezam Mohd Noor (right) having posed the same challenge last week.

Ezam, a former PKR Youth chief, was quoted by Berita Harian as saying that Abdul Aziz is partisan, citing "evidence" that the latter had received royalty for a book written for an institute linked to Opposition Leader Anwar Ibrahim.

"I challenge (Abdul) Aziz to reveal the amount of royalty he received lately for the book written, as the amount is pretty hefty," Ezam had said on Sunday.

On this matter, Abdul Aziz responded that it was "normal" to be paid a royalty for books written.

"This is not a commission or bribe. Did Ezam really say that? My advice to him is to focus on the issue at hand," he said, puzzled that that politicians would attack him at all.

"I've never attacked them, so why are they all so angry with me?"

The academician, who is under probe by the Malaysian Communications and Multimedia Commission, is taking legal action against Utusan for its reports on the matter.

Ferdtan - Zul Noordin, enjoy your benefits as an MP while it lasts, as in the next election you would not be selected by Umno to contest. Don't issue challenges for the sake of staying relevant. By asking Aziz Bari to apologise the Selangor Sultan, when it was never a issue, you are meddling with affairs of the state. On top of that you are not a Selangorean; so don't speak on our behalf. Stop dragging the good name of our sultan for your selfish political end.

BTN - This Katak Zulkifli Noordin is the one that majority of rakyat is angry of. Before he wants to debate with anyone he will need to apologize to all the voters who voted for him and felt cheated by his pengkhianat action. How can you trust someone who conveniently betrayed the masses who voted for him because of the party that he represents. He is a gonner in the next election. If Addul Aziz were to challenge him in the next election this katak will lose not only his seat but his deposit as well.

fencesitter - Aziz Bari, do not waste time these idiot. This is a democratic country and you can have your opinion whereas these long jump champion can have their. as you are a law professor we trust you are more knowledgable. The idiot who asked you to stand as a candidate must have PEA brain. He who challenge another must be able to do vice versa otherwise he should shut his mouth. If you challenge him to be a law professor he is not qualified likewise to his challenge you can stand as candidate in GE 13 if you desire. This idiot does not know that each individual has each taste why must follow other?.