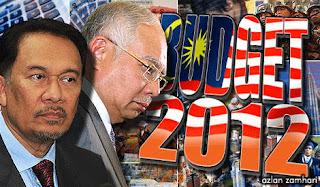 The Najib administration has been accused of over-estimating 2012 growth projections, contrary to what other major analysts are predicting.

In his speech at the Dewan Rakyat today, Opposition Leader Anwar Ibrahim said the growth figures stated in Budget 2012 were much higher than projections by the World Bank, Malaysian Institute of Economic Research and RHB.

Anwar, the Permatang Pauh MP, said the six-fold increase in foreign direct investment (FDI) in 2010 mentioned in Budget 2012 was also misleading, because FDI was low to begin with in 2009.

As a comparison, he read out this year's Financial Times' FDI Global Outlook Report to provide a better appraisal of Malaysia's standing in the region when it came to FDI.

He argued that Malaysia did not make it in any of the lists of countries that performed well in terms of the most in investment increases or amounts, and that neighbouring countries were faring better.

The PKR de facto leader's speech went generally without interruption from the BN backbenchers, except for the persistent efforts of Padang Besar MP Azmi Khalid, who continued to question Anwar's statistics and his qualifications to comment on the budget.

"These figures are formulated on the government's behalf by experts and specialist agencies like Bank Negara and others, and are thus irrefutable.

“They have long assisted the government in formulating the budget. How can you question them?" interjected Azmi.

Anwar dismissed the interruptions, saying that his eight years of experience helming the Finance Ministry gave him all the credentials he needed.

"I was the finance minister for eight years, that is how I know," the opposition parliamentarian hit back.

He then had to stop his speech for the lunch break.

Resuming his speech afterward, Anwar ended his debate by branding the 2012 Budget Bill as a mere re-branding of failed projects under a new name.

Such re-branding, he claimed, is rampant in the budget, with many reclaimed initiatives renamed in expensive public relations campaigns funded by the public coffers.