Cabinet involvement in AG's report due to Mahathir...

The delay in the unveiling of the Auditor-General's Report is due to the weakening of institutions caused by Dr Mahathir Mohamad during his term as prime minister, said constitutional expert Abdul Aziz Bari. 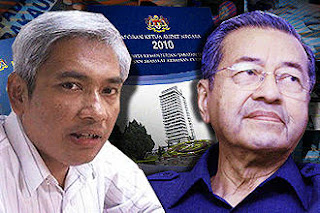 The UIA law professor said Mahathir had amended the federal constitution in 1 993 by stripping the rulers of legal immunity and providing for the government to "issue orders" to the Agong.
This is by way of the insertion of Article 40 (1A) in the constitution stipulates that the Agong must act in accordance with the advice of the cabinet.

"Essentially this is the legacy left behind by (the) Mahathir administration, which preferred a muted monarchy," he told Malaysiakini today.

"At the same time we have an executive who could not care less about checks and balances and a monarchy that is unsure of its role," he added.

Abdul Aziz’s remarks follow the unprecedented delay in the tabling of the AG’s Report by more than two weeks. The report is normally tabled on the same day as the budget, which Prime Minister Najib Abdul Razak unveiled on Oct 7.

It was later disclosed that the delay was because the Report had to be presented to the cabinet before being shown to the Agong, and because of concerns that the report would be overshadowed by Najib’s 2012 Budget.

Auditor-General Ambrin Buang (right) said showing the report to the cabinet before the Agong has been standard practice since 1982, soon after Mahathir became prime minister.

This was to allow the cabinet to familiarise themselves with the issues raised in the report and explain it in Parliament, said Ambrin.

Abdul Aziz, however, has pointed out that it is wrong for the cabinet to be involved in the AG's Report, and that it should go straight to the King before being tabled in the Dewan Rakyat.

Commenting further, Abdul Aziz conceded that in the tabling of the AG’s report, the Agong is a “mere conduit”.

“Nonetheless, this is extremely important, to strengthen the role assigned to the auditor-general," he said, referring to the monarchy as "last line of defence" against Mahathir’s erosion of other checks and balances against the executive arm of government.

Abdul Aziz also chastised civil servants for carrying out orders even when these are not in accordance with "constitutional ideals".

He said that the auditor-general used to send the report directly to the Agong instead of the cabinet, but this angered Mahathir when it investigated the Bumiputra Malaysia Finance scandal in the mid-1980's.

The UIA professor also suggested that the Conference of Rulers be urged to study the possibility of appointing an auditor-general from outside the civil service.

He said this was necessary because the post is given to former civil servants who may view the position as a promotion.

"Given the culture and ethos of the civil service, I find it natural for them to be unable to live up to the expectation."