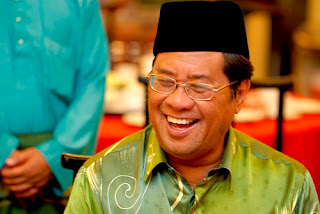 Tan Sri Dato' Seri Abdul Khalid Ibrahim is the 14th MB of the state of Selangor. He is considered by business and political analysts as the best MB Selangor has ever had.

He is a former corporate figure and held the position of CEO (1979-1994) in the government-controlled fund management firm Pemodalan Nasional Berhad (PNB). He later became the CEO of Kumpulan Guthrie Bhd (1995-2003).

Despite being an opposition party member, he retains his positions in various quasi-government organisations due to his broad experience and integrity in business and industry.

Among his notable positions include, Director, SIRIM Bhd., Adviser, Islamic Development Bank, Fellow, Institute for Strategic and International Studies and Member of the National Productivity Council.

The chief executive of Selangor’s prowess, popularity and credibility have surpassed many times over the reputation of most UMNO leaders in the country. No UMNO politician in the country could downplay his rising popularity with nutty and daft rhetoric and propaganda.

The people of Selangor and the country in general have cherished the MB as a very able leader. His leadership, business acumen and his calm, or rather shy, approach to politics could even make him a capable prime minister of Malaysia.

No amount of political slander and slur against the incumbent MB to weaken him and the state government could dent his popularity among the people of Selangor and the nation. His political foes are now out of ideas on how to taunt the well-grounded fame of this personality.

The Opposition grip on Selangor is the envy of many politicians in the opposite political divide. However, that faction itself has no politicians who could match the grit and merit of the incumbent MB of Selangor.

As such, there would always be some off-coloured politicians spewing words of hatred against him to rock the boat and bring down the state Government. This unfortunately is hollow and void, as it would only keep on echoing over them.

The Opposition controlled Selangor state government has achieved so much in the last three years worth emulating by many other states. The three pillars these Opposition states adhere to are competency, accountability and transparency.

And there is no avenue for corruption, nepotism and cronyism to haunt the administration in these states. Taxpayers’ money is well utilised and well accounted for. The delivery system is well monitored by a stringent internal auditing process unlike the other states.

Khalid is not an armchair economist or a businessman like many of the politicians in the country are. He has the razor-sharp business insight in him, is familiar with the nitty-gritty of the economy and knows in dept what constitutes a business and an economic-oriented nation.

These are the endearing assets that have made him an ingenious and nifty leader. But even so, greater men than him have been fallen by treachery and outright electoral fraud.

Umno has cast its eyes on 9 key seats in the state. The winning margin for the Pakatan Rakyat is minimal there and it won't be difficult to funnel 'phantom' voters to these areas and wrest the seats away.

Selangor would then fall back to BN. And the biggest losers would be the Selangorians!

I am just a resident in Selangor from 2007 till now when we shift from Ipoh. I am grateful to Allah
as my doa for YAB Kahalid to be a successful leader become a reality. Today this blog persist and reveal the achievement of this MB. I am so grateful my prayer were answered. The MB don,t know me but we a the people know him.