Muammar Gadhafi, who ruled Libya with a dictatorial grip for 42 years until he was ousted by rebels in a bloody civil war, was killed Thursday when revolutionary forces overwhelmed his hometown, Sirte, the last major bastion of resistance two months after the regime fell.

Prime Minister Mahmoud Jibril confirmed Gadhafi had been killed. "We have been waiting for this moment for a long time. Moammar Gadhafi has been killed," Jibril told a news conference in the capital Tripoli.

Al Jazeera has acquired exclusive footage of the body of Muammar Gaddafi after he was killed in his hometown, Sirte.

Abdul Hafiz Ghoga, vice chairman of Libya's National Transitional Council, confirmed that the ousted leader had been killed on October 20, 2011 near Sirte.

"We announce to the world that Muammar Gaddafi has been killed at the hands of the revolutionaries," Ghoga told a news conference in Benghazi.

The news came shortly after the NTC captured Sirte after weeks of fighting.

Footage shows Gaddafi's bloodied body
Initial reports from fighters said Gadhafi had been holed up with the last of his fighters in the furious battle with revolutionary fighters assaulting the last few buildings they held in his Mediterranean coastal hometown of Sirte. At one point, a convoy tried to flee the area and was blasted by NATO airstrikes, though it was not clear if Gadhafi was in the vehicle.

NBC's Adrienne Mong, reporting from Sirte, saw a massive convoy heading west toward Misrata. Gadhafi's body was rumored to be in the convoy, she reported, but NBC could not confirm that.

Later, Al-Jazeera TV showed footage of a man resembling the 69-year-old Gadhafi lying dead or severely wounded, bleeding from the head and stripped to the waist as fighters rolled him over on the pavement. Witnesses said his body was put on display in Misrata.

Celebratory gunfire and cries of "Allahu Akbar" or "God is Great" rang out across the capital Tripoli as the reports spread. Cars honked their horns and people hugged each other. In Sirte, the ecstatic former rebels celebrated the city's fall after weeks of bloody siege by firing endless rounds into the sky, pumping their guns, knives and even a meat cleaver in the air and singing the national anthem. 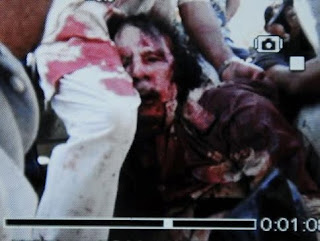 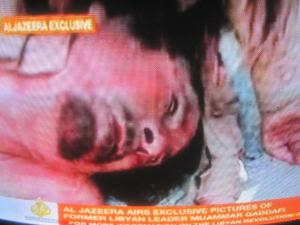 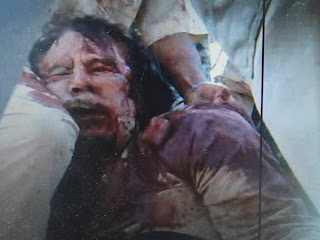 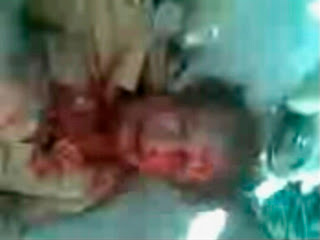 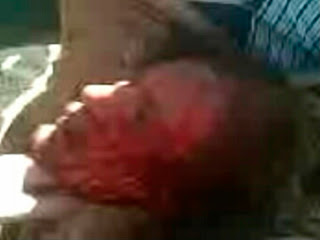