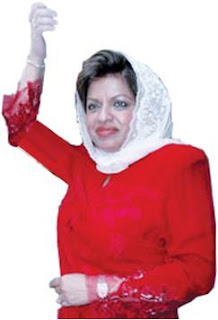 The Auditor-General’s Report, released yesterday, showed that the National Feedlot Centre (NFC) set up in 2008 in Gemas, Negri Sembilan failed to hit its target of breeding 8,000 cattle last year.

Among reasons cited were the NFC corporation’s poor management including its failure to train 130 farmers for the project, the 5,000-acre farmland in Gemas being overgrown with thorny acacia shrubs, and poor use and maintenance of its facilities.

The NFC is a joint-venture between Negri Sembilan and federal government through the Ministry of Agriculture and Agro-based Industry (MoA) to commercially produce more beef domestically and cut down import of the meat.

Shahrizat’s (picture) three children, Izran, Izmir and Izzana, reportedly play key roles in the NFCorp. Izran is CEO while his brother and sister are executive directors.

RM770,000 to supply electricity to one house

According to the project report, electricity supply was intended for 17 houses at a village in Indera Mahkota, Pahang.

But a visit by the Auditor-General's Office to the site found only one house there.

In its explanation, TNB said when the project was approved, the 17 houses were in the process of being built but only one was subsequently completed. However, the Auditor-General took TNB to task for approving the project, despite the area not fulfilling the criteria required under the BELB project.

"... The houses there should have been permanent residences that are occupied and suitable for electrical wiring to be done."

It was further noted in the Audit Report 2010 that TNB approved a RM65,193 project to supply electricity to five abandoned houses at a village in Bera, Pahang.

The report rated the performance of the BELB project as unsatisfactory, with only 43.2 percent or 16 of its 37 projects completed as of last year.

In a separate audit, the Auditor-General said the RM160.74 million project to build, supply and equip computer labs for schools in Sabah tasked to TimeCom Holdings Sdn Bhd, has failed.

In a visit to SK Kepayan, Kota Kinabalu, it was found that the school's computers and other ICT equipment have been left in their packaging for three years.

It was further discovered that some of the computers and equipment were infested with termites.

This, the report said, was due to prolonged delays in completing the computer laboratories, which were meant to begin on Oct 31, 2006, and completed on April 30, 2008.

However, it noted that as of 2010, only two of the 300 planned computer laboratories were completed and handed over to the Education Ministry.

This was despite the contractor having been paid RM98.9 million or 87 percent of the RM113.74 million total construction cost.

The family-controlled beef project is marketed under the label “Gemas Gold” and can be found on the menus of several family-owned restaurants in the Klang Valley.

The audit report also found NFCorp did not finalise the standard operating procedure or implementation agreement in 2010. It noted NFCorp claimed it could not do so because the government has yet to build an abattoir capable of slaughtering 350 heads of cattle a day.

The audit report said the Treasury completed a study on the slaughterhouse on April 5 this year to be presented to Prime Minister Datuk Seri Najib Razak.

The audit report noted that two factories related to the project have yet to be built, namely the livestock feed factory that was part of the pilot project under the entrepreneur development programme, and a bio-gas factory to process waste from the abattoir and the feedlot into fuel for the farm.

The report stressed infrastructure upkeep as the most important factor for the project’s success and recommended the MoA devise a “Blue Ocean” strategy to boost its cattle breeding production to meet the original 60,000 target by 2015.