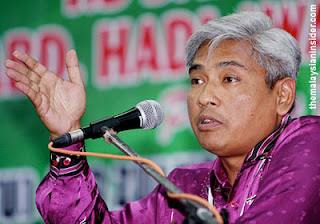 The International Islamic University has issued a show-cause letter to its law lecturer Abdul Aziz Bari, who recently courted controversy with his recent public comments on constitutional matters concerning the Malay rulers.

Sources told Malaysiakini that the university, known as UIA by its Malay acronym, that the letter was issued to Abdul Aziz this afternoon.

The content of the letter has yet to be determined, as Abdul Aziz could not be contacted.

Malaysiakini has not been able to confirm the matter with university authorities as it is after office hours at the time of writing.

The police are investigating Abdul Aziz’s comments on the Selangor sultan’s decree on the state Islamic Affairs Department's 'inspection' of a multiracial thanksgiving dinner on Aug 3.

A police report was lodged against Abdul Aziz by Senator Ezam Mohd Noor, who accused him of inciting the public to hate the institution of the royalty.

Ezam deemed this to be seditious and a threat to security and order.

After lodging the police report, Ezam also urged UIA to take action against the law professor who is a well known constitutional expert.

He said that UIA had brought shame to the university and Abdul Aziz was in cahoots with Malaysiakini as part of a “planned evil agenda” to undermine public institutions.

Earlier this morning, Abdul Aziz had confirmed that he had been questioned by the Shah Alam district police over the matter.

He revealed that he is being investigated under the Sedition Act 1948.

The Malaysian Communications and Multimedia Commission (MCMC) is also probing the matter and have interviewed Malaysiakini staff today.

wira - Show cause for what? For expressing an academic opinion? It's no wonder why no Malaysian universities make it to the Times top 400.

Anonymous - OMG! the University can't be that serious. This man learned in the law was just expressing his intellect on the matter. It is a kind of education and knowledge for all and sundry by an expert in a certain field. If you don't agree with him, fine, share your knowledge, if any, with him and the others and let the public and others of equal knowledge concur or differ. That is how one learns otherwise one will always remain in the shell forever. A bunch of idiotic morons who have overstepped the bounds of common sense.

fairplayer - Oh dear, UIA is listening to traitors and kataks! UIA is obviously dependent on UMNO to survive??? Where is the freedom of speech and expression? UIA doesn't recognise or appreciate their quality and truthful law professor! Does UIA prefer hypocrites and racists? If so, UIA and Malaysia are both doomed, unless/until a new and better gov't is in place! May the good Lord help Malaysia!

P.Dev Anand Pillai - This is the best chance for Aziz Bari to quit IIU and join some other better Universities around the region. This is what Prof Rama had to go through when he was with UKM, today he is the Dep Chief Minister of Penang, so the writing in on the wall Prof Aziz, get out while you can and join PAS and seek a good urban seat, you will definitely win hands down if you are put as a candidate this coming GE. They harrassed Farish Noor and he now teaches in Singapore, they did the same to Prof Azly and he is now in the US. So they will continue this Gestapo like rule if the Malay academics disagree and revolt. So the moral of the story is that the Malays must remain dumb and stupid and must not question. There is no room for smart Malays in Malaysia. Your own kind will finish you off. Soldier on Prof Aziz, PAS will be a good platform.

AZIZ BIN KADER - Why law experts cannot make their comments? UMNO proof he is wrong instead of using police like school children.

为国为民 - Is IIUM senate or board of directors controlled by UMNO?

Quote - 'So the moral of the story is that the Malays must remain dumb and stupid and must not question.'
Sorry...but we are not like those dumb UMNO goons....