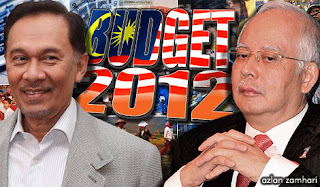 This, the Permatang Pauh MP said, will help the rakyat to hear both sides, as opposed to the one-sided battles in the media.

After all, Anwar added, it is only fair that the PM should do so after loudly sounding the gong over the government’s 2012 Budget and crying wolf over Pakatan’s shadow budget.

Concurrently finance minister, Najib has been defending the BN budget and taking pot shots at the shadow budget and Pakatan’s Buku Jingga.

Most recently Najib has accused the shadow budget as being akin to a “right-wing republican budget”, alleging that its proposed spending cuts may cause hardships and “failed to take into account the needs of the people”.

He said this in a speech while opening BN component Gerakan’s 40th National Delegates Conference in Kuala Lumpur yesterday.

"If he can do that in the government-controlled media and in BN component parties (events), then he should be able to do so face to face," Anwar told a press conference in Parliament House today.

He argued that the PM’s remarks smack of a clear attempt to deflect from the fundamental issue of poor governance, endemic corruption and BN policies to enrich family members and cronies.

Asked if he has a timeline in mind, he said that the debate should be done “immediately”, and especially now that the budget is still being debated in parliament.

Quizzed why he doesn’t utilise the ongoing parliamentary budget debates to its fullest and bring about the issue to the government, Anwar accused the federal government of legislative indifference.

'Debating with the deaf'

“It is like debating with the deaf,” sniped the Opposition Leader.

“It is a closed process,” chimed in Shah Alam parliamentarian Khalid Samad, who joined Anwar in the press conference.

Anwar alleged that the parliamentary debate does not really allow for any real engagement and earnest response to debates, but is more of a one-sided affair.

The opposition has long since complained that the BN government has used its majority muscle and party line whip to turn Parliament into a mere rubberstamp as opposed to the place where laws were forged and are evolved.

The former deputy premier said that he will not set any conditions and would agree to meet the PM on any turf, anytime and under whatever conditions, as long as he is given a chance to debate the important issue with the BN chairperson.

“I don’t mind if he has more time than me, five minutes more of 10 minutes, I’ll agree, just give us the chance.”

Anwar believed that there are several concerns that he thinks the rakyat should know about and seek an explanation from Najib in open debate.

* The national debt level exceeding the ceiling of 55 percent of the nation’s GDP as prescribed in the national budgetary guidelines.

* Potentially inadequate financial sources to finance the remainder of 2011 expenditure and the RM46 billion deficit to be funded through additional debts announced in the budget.

Anwar posits that with such concerns still unaddressed, a policy debate on economy has become an urgent necessity.

“If Datuk Seri Najib is truly convinced that his economic agenda will benefit the rakyat, let him reason it in a public debate including justification for his refusal to implement structural economic changes such as a universal minimum wage for all workers and the dismantling of monopolies in public goods and services,” concluded Anwar.