When public funds benefited a Minister & family, no wonder A-G says NFC is a flop... 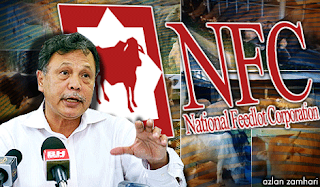 When public funds are allocated for a project for specific purposes, the custodians are expected to do just that. Not what they think is right.

The NFC has no bloody business to use the money and risk it in other investments. That is against the rule of the law. That’s unethical.

It is not about whether the money is invested wisely into condominiums to bring about fat returns.

The NFC chief Salleh Ismail, who is also the husband of Wanita Umno chief Shahrizat Jalil, was reported to have finally broken his silence on Nov 17, 2011, defending its RM12 million purchase of two multi-million-ringgit luxury condominum units in Bangsar as a “good business decision”.

The issue is not about “good business decision”. The issue is about public funds released to boost beef production so that all Malaysians, especially the poor, can enjoy affordable beef.

If the government had wanted to invest into real estate, it would have allocated funds for such purpose to real estate professionals – not cow breeders.

If public funds allocated for specific project purposes can just be used for other purposes by any Tom Dick and Harry with political patronage, then the financial system of the country is akin to a free-for-all – anyone can do anything with funds allocated for projects. In short – chaos is the order of the day.

Do you goons now understand the implications of cow breeders using money allocated for cow breeding to buy condominiums? Is it a wonder that the Auditor-General (A-G) has concluded that the NFC project is a flop, failing to meet its target of beef production?

Many real estate experts have concluded that Kuala Lumpur is facing a glut of luxury properties, with rental yields falling as much as 50 per cent in some cases.

The Auditor-General’s Report released last month had criticised the NFC, pointing out that it was now “in a mess”. The report said production in 2010 was only 3,289 head of cattle or 41.1 per cent of the target set.

So, have public funds benefited Malaysians? Not even the cows have benefited.

Only Shahrizat, her husband, children and their companies have benefited.

Plain and simple, don’t you think so? If you still cannot understand such simple observations, do Malaysians and Malaysia a favour – go jump into the Straits of Malacca. - Jackson Ng