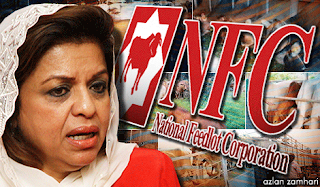 Replying to reporters this afternoon after almost two weeks of silence over the controversy, Shahrizat said: "They deserve it (the NFC) because they work very hard."

She also commended the ministers who had answered questions and tackled criticisms over the matter.

"The agriculture and agro-industries minister has responded, and I have been informed, the answers are quite clear... I am happy because the ministry will monitor the project," she said after officiating an arts exhibition in Kuala Lumpur this afternoon.

Barking back at her detractors who have questioned the propriety of her family members being awarded the project, and criticisms centering on its currently troubled state of affairs, Shahrizat said what her family does not deserve is all the brickbats that have been thrown over the matter.

"I think my family does not deserve to get this kind of thing (being) said by the opposition," she added.

'We are not easily broken'

Shahrizat also accused the opposition of seeking to use the controversy against Umno and BN's women's wings.

"To me, I see this as part of a political agenda. This is an attempt by the opposition to weaken the spirit and actions of Umno Wanita.

"We are not so easily broken," she asserted.

"I have been in politics for a long time. They (the opposition) are not really interested in the NFC (itself).

"It is directed to me, as Umno Wanita chief, and as BN Wanita chairperson," she added.

Shahrizat trained her sights particularly, on her counterpart in Pakatan Rakyat, PKR Wanita chief Zuraida Kamaruddin, for implicating her family in the project.

"Their political agenda is very clear. They are shaky, just like that PKR Wanita chief. I'm ashamed that a Malaysian woman can be like that," she sneered.

Pissed Off - Hey sharizat...you did not answer the accusations by the opposition. You are just playing taichi. 80% of the malaysians are hard working. How come they did not get so lucky? You are not fit to be a Minister. You dont have the rakyat's mandate. You damn &^%$ing back door minister.

Anonymous_4056 - In the first place she or her family does not deserved to take govt's project, it is conflict of interest. This is exactly what we called CROYISM. That is exactly why UMNO ARE FAMOUS FOR corruption, cronyism and nepotism. And UMNO LEADERS see nothing wrong at all as they behaved so arrogant thinking they deserved it and the country belong to them. They think the country's wealth are rightfully theirs and they get angry if question.

AnesthMO - Many other people have also been working hard, if not harder. The question here is what qualifications, other than being family members of a minister, that they have been awarded the project and the money. If the project was awarded to unqualified and inexperienced party, then it is surely a waste of money and resources.

Malaysians Are Not Stupid - What she says is just a reflection of the mindset of UMNO politicians .... The entitlement mindset. The PM's family thinks they are entitled. The Defence Mininster's family thinks they are entitled. All the ministers thinks they are entitltled. All the division leaders and branch chairmen think they are all entitled. Of course her family work very hard. Work very hard to screw the country and plunders her wealth. What she fails to address is, "is it appropriate for a minister's family to be involved in any business where the minister have an oversight". Guess we have to a stage where greed is no longer something t be ashame of. We are living in a world where getting rich is paramount. Screw the methods.

ANONIMOUS Z - There is few thousands of Malay, Chinese and especially the Indian farmers have been working all their life in the livestock farms for generation to generation. Isn’t that they worked a lot harder than your family? Why they don’t deserve it but your family?