After Ezam, Nalla, Najib to appoint Ummi Hafilda as the next Senator... 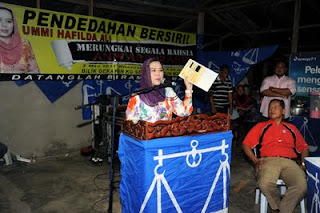 Hot on the heels of the highly unpopular move to appoint MUIP president KS Nallakaruppan a Senator, there is talk among select groups in Parliament that the next political 'villain' to be rewarded is Ummi Hafilda.

While the news cannot be confirmed at this stage, it seems her 'supporters' are furious that she has been left out of the anti-Anwar Ibrahim menage a trois that is being cultivated, groomed and fed by Prime Minister Najib Razak's Umno party. With a bit of luck, it seems that Ummi may well succeed in becoming the next BN-appointed Senator.

If that materializes, Malaysians are bound to curse but lazy people that many are, they would probably let it go after a good laugh and strenuous bout of head-shaking, plus dark warnings about the country going to the dogs.

After all, the Malaysian Senate has already been likened to a sewer, where many political misfits are slotted to keep them happy until their next assignment. Indeed the Senate has become a death row of sorts for zombies waiting for reactivation by master puppeteer Umno. So what is one Ummi extra?

It does make a lot of sense though, as her anti-Anwar comrades Ezam Mohd Noor and Nallakaruppan have already been so rewarded. It seems extremely unfair to leave Ummi out considering that they make such a lovely trio.

The three also share the same claim to fame, in that they are willing to debase themselves by going around defaming and libeling Anwar, the Opposition Leader and PKR de-facto chief.

They also are all fond of saying that they will provide proof of Anwar’s wrongdoing, in Ezam’s case he claims to have several boxes worth. None of the proof has ever materialized, nor will it ever, since it doesn’t actually exist. It looks like poor Abdullah Badawi, the former premier who recruited him may have grossly overpaid by millions.

Now, Ummi has an advantage over the other two. She is not only petite and pretty like Thai PM Yingluck Shinawatra, she is also well-travelled, having been to London with a gentleman called Baginda, not to be confused with Razak Baginda, who is also, apparently, in London.

Ummi and her Baginda have fallen out, however, and Ummi was going to sue him for RM100 million for claiming to have had sex with her. But the court threw the case out.

Even so, with the right public relations consultant - perhaps Najib and Sarawak Chief Minister Taib Mahmud could advise her - a complete image makeover to 'rehabilitate' her credibility is not impossible.

As Senator, what she says in her future ceramahs together with Nalla and Ezam would carry greater weight. It would also be a sort of an 'in-your-face' to Anwar, signalling to the rural folk that what the trio say about him is bound to be true. After all, they are ... Senators!

Ummi would also make a good choice as Ambassador to the UK, since she knows London well. Certainly, her ambition is big enough. While some picky cavilers may think those are not good enough reasons to be appointed Ambassador, Ummi must be strong and ignore such naysayers. After all, she would have been appointed Senator on reasons that are just as flimsy.

That's right. This is not so tongue-in-cheek a story after all. There are undercurrents snaking through the dark-paneled corridors of the Malaysian Parliament, or circus as some call it.

And in the event Ummi’s appointment goes through, we must congratulate Najib as a man of strong conviction in his selection of Senators, even if it turns the Senate into a bawdy-house, and gives rise to much public laughter.

Sin-ator Ummi - If this 50 year-old virgin becomes a Senator, the old, old cocks in the Senate will have erections everyday. No need for tongkat ali or viagra. Not that she is beautiful but her heavy make-up and perfumes will hide her wrinkles and bad body odour. Senate attendance will also be very high. They will all come for their daily cheap thrills.

Kayanic - As Senator she can also be appointed as minister. Wow!! double wham to AI if she replaces Muhyiddin and become our favorite DPM.