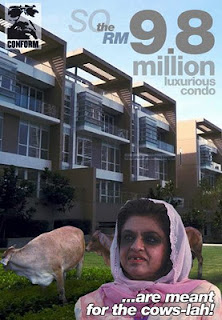 The reported RM70,000 in monthly rental for not one but two condominiums owned by the National Feedlot Corporation (NFC) has property consultants and real estate agents shaking their heads in disbelief.

The experts say that the highest rental that can be expected for even the penthouse at Bangsar’s One Menerung condominium is about RM24,000 per month.

They also point out that even if the tenants were renting the biggest condominium unit at One Menerung, which is between 6,000-7,000 square feet, the tenants would be paying least RM10 per sq ft, which is double or more the rate at KLCC’s Binjai On The Park, currently KL’s most expensive condominium address.

The NFC also said yesterday that the rental yield for the two condominiums had hit 12.9 per cent, which is far in excess of the industry benchmark of three per cent or less.

“Who is the tenant?” asked one veteran property consultant. “It is unbelievable. To get RM70,000 for a condominium is unheard of. Usually when renters pay more than RM15,000 they expect to get a whole luxury bungalow.”

He pointed out that multinationals were very unlikely to have such a huge budget for rent and wealthy Arab businessmen would prefer to buy their own place rather than rent.

Real estate agents for One Menerung contacted by The Malaysian Insider said that it was “not possible” to get RM70,000 in monthly rent and that it would be difficult to find anyone willing to pay even RM4 a sq ft.

Figures from a valuation report on One Menerung obtained by The Malaysian Insider pegged rents for the penthouse at about RM24,000 and between RM14,000 and RM17,000 for the smaller units below 5,000 sq ft.

NFC executive chairman Datuk Mohamad Salleh Ismail reportedly said at a press conference yesterday that it bought two condominiums at RM6.9 million and rented them out at RM70,000 a month, giving a yield of some 12.9 per cent. The size of the purchased units was not reported.

Salleh had also said that if it had put the money in fixed deposit instead, it would have earned only 2.6 per cent to 3.25 per cent returns.

Many luxury condominiums in the city however have had a hard time finding tenants with some landlords having to drop rents by as much as 50 per cent.

Property consultancy DTZ said in its third quarter report last Thursday that it expects demand for luxury residential units in KL to be slow with overall rents for high-end condominiums at about RM3.50 per sq ft.

Umno Youth chief Khairy Jamaluddin had said last week that the NFC decided to use funds earmarked for the feedlot programme to invest in luxury condominiums after the government ran out of money to develop satellite cattle farms as planned.

It has not been clarified however if the federally-funded NFC is allowed to make such alternative investments.