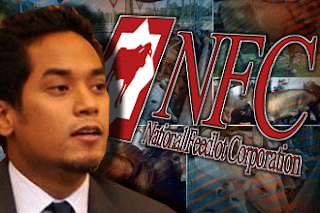 The purchase of an RM10 million condominium unit by a sister company of the troubled National Feedlot Corporation (NFC) was a strategic move, so that the money would not lie idle, Rembau MP Khairy Jamaluddin says.

In an article posted on his blog today, Khairy said the company - National Meat and Livestocks Corporation (NMLC) - had RM83 million sitting idle because the NFC production was delayed.

“The operational delay was caused by the NFC management and its reasons were explained by the agriculture and agro-based industries minister in Parliament on Nov 8, that the government had insufficient funds to develop satellite farms.

“When these farms cannot be developed, a portion of NMLC funds could not be spent... When this delay happens, the NFC management is faced with a important decision.

Waves of attack by PKR

Recently, Khairy had been at the forefront of the BN backbenchers' defence of the NFC project, which was panned in the Auditor-General's Report 2010.

The controversy came to a boil when PKR criticised the federal government's RM250 million soft loan for the failed project, which is being handled by a serving cabinet minister's family members.

Women, Family and Community Development Minister Shahrizat Abdul Jalil said her family had worked hard on the project and do not deserve to be criticised.

Yesterday, PKR exposed more documents to show that the NFC had paid RM9.8 million for a unit of the One Menerung condominium in upmarket Bangsar, Kuala Lumpur.

The party accused the NFC of misappropriating funds in an investment that does not relate to cattle-rearing.

Khairy warned that should the money be left idle in a current account, its real value may be affected and thus the NLMC management acted responsibly.

“As a simple example, if NLMC bought a cow from the satellite farms today, the cost might be cheaper compared to next year due to inflation.

“When all beef purchases could not be made, it is the duty of the management to decide when they are going to do with the monies in their current account,” he said.

Khairy said that the management had made a safe investment with good returns and that the asset could be sold when cash is needed.

“It is for certain that they will see a residential project of good quality and interest to ensure that NLMC’s rental returns and return of investment is exceed that of a current account.

“It is understood that the apartment has already been rented out and is generating returns for the NLMC. The property value had already increased since then,” he said.

MCA supporter - Question: 1) Under whose name the cow condo? 2) How you expect to make short term gain in down turn market now, you still have to pay lawyer fee& stamp duty, isn't it gamble, or should we say CBT case. 3) A 10million condo, how to sell and make a profit in this uncertain economic period? 4) Advice to interested buyer: good time to buy this condo, Sharizat will force to sell, and put the SPA value higher than 10million so it look good to her( but they sell you at 6million only)........sound business strategy..

Baiyuensheng - KJ, when a company purchased asset that is not related to your core business - this should be a red flag for fraud. Look at olympus!! And you tell me why a cattle management business entity would want to invest in a condo. And you claimed this is done to generate return - what a syut answer!You have wasted your talent, and if I have the same and out of oxford or should I said oxfart, I am sure I would do a lot of great things for Malaysia, more than you did.

mob1900 - So the money meant for development are put into more cronies pockets as 'investments' while deprive real cattle farmers who're in need of funds. wow, great explanation or boot-licking, KJ.

Khairy, you don't try to fool the public, the money is meant for breeding cow and not for investment of luxury condo or shares.

Can the Education minister use funds meant for school for gambling in Genting?

If can, then tell Najib to say it out because we ordinary Malaysian do not want to end up in jail for following your reasoning.

The Auditor General said that the NFC is a mess but Khairy contradicts the AG by saying that it is a good strategic investment move.

Now, who is correct?

Buying a condo mean that you cannot liquidate the money as fast as cash. What happens when NFC needs instant cash?

MACC get to work immediately...

Khairy says its a good investment and getting good rental.

Yes- Paid by whom and to whom...or is this another Lie?.,

Check, Verify & Confirm - we devoted, suffering and poor Public want to know and have a right to demand Accountability & Transparency.