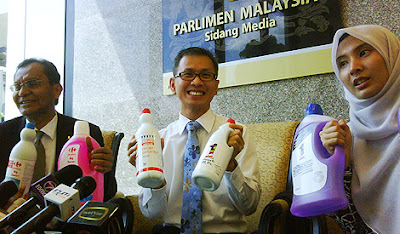 The reality of Kedai Rakyat 1Malaysia’s (KR1M) products is far from the “outrageous” claims of them being up to 50 percent cheaper than in other markets.

Saying this today, Pakatan Rakyat MPs - who had lugged samples of grocery products to Parliament to prove their point - said while there were some products that were indeed cheaper in the KR1M shops, they were not as cheap as touted.

“The price differential is far less than the claims of 30 to 50 percent for most products,” DAP’s national publicity chief Tony Pua (left) told a press conference.

KR1M was mooted by Prime Minister Najib Abdul Razak in June to tackle the escalating cost of living, and introduced 250 ‘1Malaysia’ products that were claimed to be 40 percent cheaper than other sundries in the market.

Contradicting this today, Pua said: “A shopping trip to a local hypermarket such as Carrefour, buying products from condensed creamer to canned sardines to dishwashing liquid, will immediately show that the truth is far from the outrageous claims made by the domestic trade, cooperatives and consumerism minister and the prime minister.”

The Petaling Jaya Utara MP urged that an investigation be conducted against KR1M and proponents of its products, as he said they breached provisions of the Malaysian Code of Advertising Practice (MCAP).

Pua said that although there were cheaper goods available at KR1M, however, a difference of 30 to 50 percent saving on most products was an “exaggeration”.

“For a 1 litre bottle of 1Malaysia bleach, KR1M will charge you RM1.90, claiming huge savings of 36 percent.

“However, one can easily purchase 1 litre of Carrefour or Tesco branded bleach for only RM1.29 or a massive 47 percent cheaper than KR1M,” he said.

“Even when the 1Malaysia products are indeed cheaper, they are nowhere near the claimed ‘savings’. For example, a 400g packet of frozen minced beef would cost RM4.89 in KR1M. In Carrefour, the Ramly branded packet will cost RM5.29 or only 8 percent more, instead of the claimed 18 percent ‘saving’,” Pua added.

He compiled a list of 23 daily household items purchased at KR1M that came up to RM130.49, and another batch of items from the French retail giant Carrefour that totalled up to RM120.53, which translates into 8 percent savings.

He pointed out that the government’s insistence that KR1M products were ridiculously cheap is “completely irresponsible and misleading”.

MCAP’s provision reads as such: “Advertisements should not contain any statements or visual presentation, which directly or by implication, omission, ambiguity, or exaggerated claim, is likely to mislead the consumer about the product advertised, the advertiser, or about any other product or advertiser, in particular with regard to [...] value or total price actually to be paid”.

‘What happened to RM40 million subsidy?’

Pua said it is the responsibility of the Domestic Trade, Cooperatives and Consumerism Ministry to regulate the industry and ensuring consumers are not cheated by misleading claims.

“However, when the ministry itself is guilty of such offences as a result of the Barisan Nasional government’s vested interest in KR1M, it becomes a gross breach of its responsibility to the people.”

Pua added that he would be happy for the government to promote cheap, quality products but said that such promotions should apply to any company capable of delivering low prices and not just Kedai Rakyat.

“We fear such measures will only end up profiting certain business entities instead of offering real quality products at the cheapest possible prices to the man on the street,” he said.

She noted that a RM40 million subsidy was given to KR1M to open up 85 stores and for advertisements but that is not reflected in the pricing of the products.

“How will the government justify the RM40 million... it is clearly a blatant lie when there are products that are more expensive,” she stressed.

“It is very hard to not make such an accusation because they say it is cheap and it is not, people tend to get emotional,” said Nurul Izzah.

wira - KR1M is basically an outrageous scheme by another UMNO crony to fleece the nation. It is just another hypermarket chain, selling at prices similar to TESCO, Carrefour or Giant for a range of household products. The 1Malaysia brand name is no different from that offered by manufacturers to other OEM customers. The RM40 million subsidy given is simply cash reward for the crony to expand his business using publicity paid for by the public.

MAHINDAR SINGH - Frankly this is an election ploy. Do the govt need to get involved in these kind of activities? Surely there are far more strategic issues to be addressed like a. educating our minister on the what escrow acct means b. eductaion policies which is in shambles c. corruption d. crime I am sure the Tescos and Craefours can do a better job. This reminds me of the proton project

dzulkefly ahmad - Its written from the beginning Kedai Rakyat 1 Malaysia is another gimmick by BN government to trick our rakyat! Firstly, monopoly has been given to Mydin. Then grossly outrageous claims of massive savings! We can only see corruptions & croynism here. Then again, please check the quality of Kedai 1 Malaysia products! Not worth the so-called "cheap" prices.

Anonymous_3e4b - All along the rakyat knows it is just a pure politically motivated agenda ..... to promote Brand Najib (BN). When did BN ever care for the rakyat? Everything they do they do it for their own profit first . Money money money, first my money, balance only is your money.

Anonymous - Any right thinking Malaysian would smell that KR1M is a con job since its inception. The RM 40 million is going, going ...gone. Where? Into the pockets of UMNO Baru's cronies. How to stomach so much corruption in Malaysia? Vote out BN. Come, PR, come.