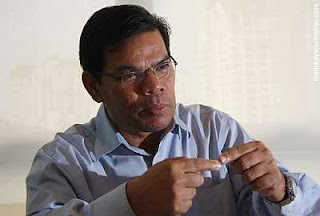 In their latest round of exposes on the scandal-tainted federally-funded cattle project, PKR leaders claimed to have proof that NFC executive chairman Datuk Seri Mohamad Salleh Ismail, Shahrizat’s husband, had ordered payment of RM31,580 to be made for his and his son Wan Shahinur Izran Mohamad Salleh’s haj pilgrimage in 2010.

“PKR has clear proof that orders for the umrah package to be paid using this public fund had come from the NFC executive chairman’s office,” PKR secretary-general Saifuddin Nasution said today.

He was speaking at a joint press conference in Parliament with Wanita PKR chief Zuraida Kamaruddin and PKR strategy director Rafizi Ramli.

The Machang MP urged the police and Parliament’s Public Accounts Committee (PAC) to probe all transactions between the NFC and the National Meat and Livestocks Corporation (NMLC) and Real Food Company (RFC). Both NMLC and RFC are majority owned by Mohamad Salleh and his children Izran and Izmir.

He said this was because financial records showed that Singapore-based firms Global Biofuture Pte Ltd and Meatworks Singapore Pte Ltd, both of which are also owned by Shahrizat’s family, currently have debts with the RFC.

In the same period, Meatworks, a luxury restaurant chain, was found to be owing RFC RM2,416,815, he added.

“PKR believes that a sum of money was channelled from the RM250 million loan meant for NFC to these personal companies of Shahrizat’s family, including to set up Global Biofuture in Singapore,” said Saifuddin.

“Global Biofuture is involved in the food and fuel business. Checks have shown that the company is in the midst of setting up a supermarket in Singapore and suspected of importing cattle from overseas through Singapore to be supplied to NFC.

The NFC has been dogged by allegations of corruption and fund misappropriation after it made it into the pages of the Auditor-General’s Report for 2010, which described the project “as a mess”.

Among others, PKR has alleged that the NFC funds were used for Shahrizat’s and her family’s personal expenses, as well as to purchase multimillion ringgit condominium units at the luxurious One Menerung in Bangsar, Kuala Lumpur.

Mohamad Salleh finally emerged in the face of the attacks last week to break his family’s silence in the matter, and moved to defend the condo purchase as well as deny the project’s alleged failure.

But PKR scoffed at Mohamad Salleh’s remarks, saying he had failed to deny a single allegation and had merely offered explanations for the many discrepancies involving the NFC.

At a press conference last week, Rafizi demanded the Cabinet disclose all its meeting minutes from 2006 to determine if Shahrizat had been directly involved in awarding the project to her husband’s company.

But Agriculture and Agro-Based Industry Minister Datuk Seri Noh Omar denied over the weekend that the NFC was ever discussed in Cabinet, claiming it was handled by the Cabinet Committee for High-Impact Projects, which was then chaired by Datuk Seri Najib Razak.

“PKR urges Najib to make a statement on this scandal immediately, especially more so now that Noh Omar claimed the project was not raised in the Cabinet but handled by the committee,” Saifuddin said today.

The NFC is now being probed by the police for cheating or criminal breach of trust and will be investigated by the PAC this Wednesday.