Ramping up its onslaught on the National Feedlot Corporation (NFC), PKR has claimed to have unearthed more irregularities from financial records of the company owned by the family of a federal minister.

At a press conference in the Parliament lobby, PKR secretary- general Saifuddin Nasution revealed that the scandal has extended to involving certain Umno leaders:

1. Cattle worth RM5,281 were apparently donated in 2009 to Works Minister Shaziman Mansor; and RM2,640 to a state assemblyperson identified only as ‘YB Yunus’ in the documents. Datuk Yunus Rahmat is currently Klawang assemblyman and a state executive councillor.

2. Cattle worth RM70,000 were allegedly sold on credit to former Federal Territories minister Zulhasnan Rafique in 2008; and the purchase price was only paid in full in 2009.

3. RM26,400 was allegedly paid for expenses incurred in 2008 by Shahrizat Abdul Jalil, whose family owns the NFC.

4. RM368,640 was said to be used for office rental and paid to NFC directors - Shahrizat's husband Mohamad Salleh Ismail and their son Wan Shahinur Izran.

The company already stands accused of questionable spending of RM250 million in taxpayers’ money awarded to it as a soft loan, but has not commented to date. Problems associated with the NFC operations were first brought to light in the 2010 Auditor-General’s Report. “These transactions should not happen if the government is really monitoring NFC,” he said of the project.

He also told reporters NFC paid RM26,400 in expenses to Shahrizat, who is women, family and community development minister in 2008.

“If the NFC really has nothing to do with her, then she should not be involved in its operations let alone using it to pay for her expenses.

“The records do not say what it was for but I hope it was not for handbags or makeup,” he said.

The company already stands accused of questionable spending of RM250 million in taxpayers’ money awarded to it as a soft loan, but has not commented to date.

Problems associated with the NFC operations were first brought to light in the 2010 Auditor-General’s Report. “If it is true (as alleged by DPM Muhyiddin Yassin ) that NFC has nothing to do with her, then she has no business dealing with the company, let alone having the firm pay for her expenses.

“I don’t know what she used the money for. But I hope that it is not for purchasing makeup or handbags,” sniped Saifuddin, in reference to the alleged NFC payment for the federal minister’s expenses. 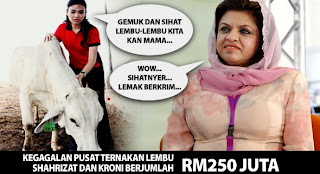 ‘Just the tip of the iceberg’

He further claimed that the details of irregular expenditures involving Umno leaders is just the tip of the iceberg.

“We can disclose more details involving more Umno leaders in the use of the RM250 million in public funds... But I am saving the juicier bits for later,” he said when pressed for more details.

Saifuddin also questioned government statements that the RM250 million soft loan to NFC is really a ‘loan’ as if this were true, the company should have been paying at least RM5 million per annum, at two percent interest for the soft loan, as stated by the government.

“PKR’s study of NFC’s financial documents has yielded no recorded payments from NFC to the government, neither was the two percent per annum recorded as annual liability by the company,” he said.

PKR has repeatedly attacked the project and called for Shahrizat to resign over various allegations including over RM84 million in “loans” given by NFC to two other companies owned by her family.

This includes an upfront payment for a RM10 million luxury condominium in December 2009.

But both Tun Abdullah Badawi and Tan Sri Muhyiddin Yassin, who were prime minister and agriculture minister respectively when the project was awarded, have said that Shahrizat need not resign as she is not directly involved in NFC.

This came after Umno MP Datuk Bung Mokhtar Radin called on the Wanita Umno chief to quit instead of “troubling others” in Umno.

Shahrizat has called the allegations a political attack to “destroy Wanita Umno” and insisted her family “does not deserve what the opposition has said. They work very hard.”

The Auditor-General’s Report released last month had criticised the NFC, pointing out that it was now “in a mess”.

But Agriculture Minister Datuk Seri Noh Omar responded on October 31 that the project was a success as it met its target of 8,000 cattle by 2010 once 5,742 slaughtered cattle were taken into account.