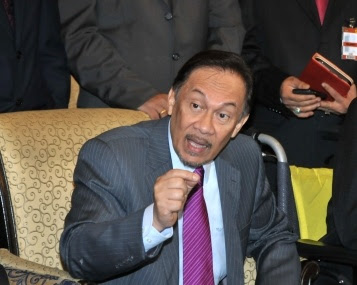 Malaysia’s opposition leader,Anwar Ibrahim, said that in the nation’s next election, his People’s Alliance coalition will end five decades of rule by the National Front as a trend toward democracy strengthens across southeast Asia.

“We’re taking over the government at the rate we’re going,” Anwar said in an interview yesterday at his office in parliament in Kuala Lumpur, citing as a sign of support a July 9 rally where thousands marched and called for greater fairness in election practices. Currently on trial for sodomy -- a charge he says was influenced by the ruling party -- he predicted that the opposition would be boosted even if he is convicted.

An opposition victory would build on gains made in 2008, when Prime Minister Najib Razak’s coalition had its slimmest election win since the country became independent in 1957. In a year that has seen autocratic regimes swept from power in a Middle East upheaval known as the “Arab Spring,” neighboring Singapore saw a record vote for the opposition in May, and Myanmar released some political rivals from jail last month.

“When will the ‘Malaysia Spring’ be? The next elections,” said Anwar, 64, a former deputy prime minister, anticipating that a vote will come anytime from the end of December to March. “Hopefully, we’ll do ours in a peaceful democratic process.”

Once the designated successor of Prime Minister Mahathir Mohamad, who ruled from 1981 to 2003, Anwar was removed from office and tried in 1998 for abuse of power and having sex with a man, which is an offense in Malaysia. He was imprisoned for six years before the sodomy charge was overturned. Barred from politics for four years after being released from jail, he then led the opposition to its 2008 election result.

A conviction in his second trial on sodomy charges is a “foregone conclusion,” said Anwar, who could be jailed for as long as 20 years if found guilty. Najib’s administration has said that the trial, which is scheduled to resume Nov. 23, isn’t politically motivated.

While an election isn’t due until 2013, Najib announced a budget last month that stoked speculation about an earlier vote. The plan gives cash to low-income families, raises civil servants’ pay and boosts spending on railways to spur growth at a time when global economic risks cloud the outlook for Malaysian exports.

Najib, 58, has sought to broaden the appeal of the ruling party, rolling back decades-old protectionist policies, opening up service industries to foreign investors and easing rules on ethnic-Malay ownership in companies.

Seeking to bolster his public image after July street protests in the capital led to the arrest of more than 1,600 people, Najib has also pledged to abolish a 51-year-old law allowing the government to detain citizens without trial.

Support for Najib slipped to 59 percent in August from 65 percent in May, according to a survey by the Merdeka Center for Opinion Research, an independent research institute based near Kuala Lumpur.

“The opposition will probably win more seats, but an outright victory is doubtful,” said Afif Bin Pasuni, a professor at the S. Rajaratnam School of International Studies in Singapore. “If Anwar is convicted, it’ll be difficult to hold the opposition together because they have very different political ideologies -- Anwar is adept at handling these differences.”

Theft, illicit sex, alcohol consumption and renouncing Islam are crimes under hudud, or Islamic law, and punishment can involve whipping, stoning to death or amputation of limbs. The Pan-Malaysian Islamic Party’s support for implementing hudud has faced objections from the Democratic Action Party. Anwar said that while coalition members are free to articulate their views, they cannot compel others to agree.

If he is convicted, Anwar said, a “mechanism” has been put in place for leadership succession. He declined to identify who would take his place.

The alliance anticipates winning more than 40 percent of the vote in the states of Johor and Pahang, making gains in Negeri Sembilan and Terengganu and getting majorities in the five states it won in 2008, Anwar said.

“The trend for freedom and democracy is irreversible,” said Anwar, who tells his party leaders to read French author Alexis de Tocqueville’s 19th-century political work “Democracy in America.” “We should be able to do much better.”