Ismail Sabri said there are bumpiutera like Nurul Izzah and Dzulkefly Ahmad 'barking' on DAP's behalf...

DAP publicity chief Tony Pua hit back against Minister of Domestic Trade, Cooperatives and Consumerism Ismail Sabri today, saying it is Ismail who is doing the bumiputera community a disservice by selling them inferior products.

Worse still, said Pua, who has been under fire for revealing the substandard quality of the products sold at the Kedai Rakyat 1Malaysia (KR1M) outlets, Ismail is doing this to the poor among his community.

The fact that Ismail's ministry was ready to fork out a RM40 million subsidy and dish "guarantees" on the quality of the products sold without strict controls, he said, showed that all this was done for political mileage.

"(BN ministers) are not at all interested in the welfare of Malaysians, especially the Malays, who will suffer the most," Pua added in a statement.

He was responding to Ismail's statement on social networking site Facebook, in which Ismail accused the Petaling Jaya Utara MP and his Pakatan Rakyat colleagues of attacking KR1M on the basis of bigotry.

Ismail had on Tuesday said:

(DAP's Tony Pua is relentlessly slandering KR1M. Now making claims of subpar quality. This issue was answered yesterday by Mydin and the suppliers. It's clear that DAP's agenda is to bury KR1M, as its suppliers are bumiputera small and medium businesses. KR1M's patrons are made up of low income bumiputera. Mydin is also bumiputera. Sadly there are bumpiutera like (Lembah Pantai MP) Nurul Izzah and (Kuala Selangor MP) Dzulkefly (Ahmad) 'barking' on DAP's behalf.)

Pua said if not for Pakatan's expose on the non-compliance of several food items, "many Malay and poor Malaysians will still be consuming poor quality" products.

Of greater concern, he said, were the "shocking deficiencies" of the 1Malaysia children's milk formula, which was shelved yesterday pending tests from Mydin.

"A whole generation of Malay and poor Malaysian children might end up suffering from malnutrition, disease and poor physical development.

"It is Pakatan Rakyat that is truly fighting for the interests of the mostly Malay consumers at KR1M as well as other poor Malaysians," Pua said. 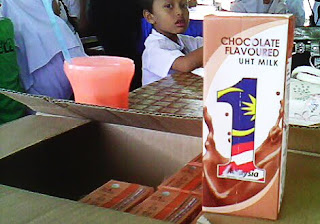 Pakatan had earlier this week revealed that the laborary tests on several food items showed that the products did not comply with the minimum legal standards set out in the Food Act 1983 and Food Regulations 1985.

It also found that the 1Malaysia baby milk formula was sold a higher price than some brands, had higher than permitted contents of Vitamin A, lacked 15 legally required vitamins and minerals and was deficient in calcium and iron.

Earlier, Ismail had also accused Pakatan of being "unfair" by comparing KR1M products to house brands of hypermarkets sold at a cheaper price.

Besides Pakatan, a consumer group has also revealed laborary tests that showed the chilli sauce stocked by KR1M contained higher than permitted levels of heavy metals.

Mydin said the supplier has shown its own tests that refuted the claim, so the chilli sauces would still be stocked. However, Mydin has also sent the sauce for testing.

There are also UMNO Malays who keep on barking on behalf of MCA and MIC and they have no qualms at all for doing this.

Providing hazardous food materials to poor Malays is good because in the long run this will weaken the Malays. When Malays are weak, they will have no energy to fight against the government, let alone the big Taukehs from MCA and MIC