PSC 'in concurrence' with Bersih on indelible ink... 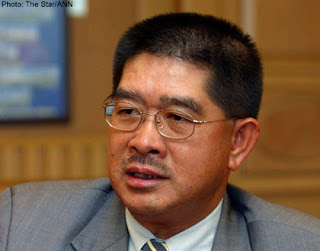 The parliamentary select committee on electoral reform today revealed that it is more or less agreeable to the proposal to use indelible ink to stop multiple voting.

Addressing Bersih 2.0 chairperson Ambiga Sreenevesan at the public hearing today, committee chairperson Maximus Ongkili said that the committee is "in concurrence" with the coalition on the use of the ink.

"We are in concurrence, except over the (need for) constitutional amendment," he said of one of the coalition's eight demands.

Ongkili, who is science, technology and innovation minister, said that the committee is now weighing the legal viewpoints on whether the use of the ink would require changes to the federal constitution.

"Based on Article 119, someone can say because I don't want to be marked, you are forbidding me to vote and infringing on (my) rights," he said.

To this, Ambiga, who is former Bar Council president said it is her legal view that it can be implemented without changing the constitution if the use of the ink is included in the elections regulations.

"Someone can say the same about the requirement to show the identity card (before issuance of the ballot paper).

"This can be done under Section 16 of the Elections Act which allows the Election Commission to make regulations. It just needs to be put before Parliament," she said.

Ambiga added that changing the constitution to allows for indelible ink is like "using a nuclear weapon to kill an ant".

Committee member Mohd Radzi Sheikh Ahmad (BN-Kangar) said that the argument for a change in the constitution is driven by concern that election results could be nullified following petitions, resulting from the use of indelible ink.

"We fear that an election (result) can be challenged and the court holds that (the use of the ink) is unconstitutional. The lawyers are split on this...," he said.

He also aired concern that the committee would go down in history as one that arrived at the wrong decision in the event that polls results are nullified because the constitution had not been amended.

Supporting Ambiga's view was the Bar Council whose president Lim Chee Wee said that he is "99.9 percent confident" that the use of idelible ink requires no constitutional amendment. He said that including this in the Federal Constitution will set a "bad precedent".

"Where to draw the line? If we include the provision to include indelible ink (into the Federal Constitution), we might as well put the whole of election offences there. I take the strong view that there is no need," Lim (centre in photo) added.

The Bar Council in its submission also proposed that the Election Act be amended to force media to provide fair coverage to all political parties, according to the number of candidates fielded.

This should include both state-owned and privately-owned media.

"There should be minimum airtime with the formula based on number of candidates contesting. The obligation is on the media to ensure the stipulated access, if the party wishes," he said.

He added that in 2008, only the Sun carried an advertisement for DAP, while deputy party Youth chief Jenice Lee told the panel in her submission later that media refused to give them space, even when they were willing to pay.