PKR is puzzled how despite an alleged scaling-down of the National Feedlot Corporation’s (NFC) production target, its soft loan from the government remains unrevised.

“Why isn’t the soft loan allocation not reviewed? Why is it still at RM250 million? Why is it not scaled-down?” secretary-general Saifuddin Nasution asked during a press conference in Parliament House today.

Saifuddin (left) argued that if the production targets were really revised downward, then the budgetary requirements should have been reduced as well.

"If from 60,000 (head of cattle) was scaled down to 8,000, then the soft loan should be reduced (in similar proportion), based on Veterinary Department estimates," the parliamentarian posited.

Saifuddin, however, maintained that as a responsible member of parliament he can only refer to official sources as his benchmark, which is the policy paper of the project, in this case.

And most importantly, the PKR secretary-general claimed, despite the footsie played by the government in defending the project and its soft loan to the company owned by the family of a minister, they still failed to answer on the possible mishandling of public funds, such as the expensive ‘holiday’ on company money, and monies allegedly transferred from NFC to associated firms also owned by the same family.

The government had insisted that the controversial NFC had met its targets, despite failing to comply with an early policy paper for the national feedlot project to supply 60,000 head of cattle per year, insisting that the new target was revised to 8,000 head annually to account for delays in infrastructure and market access development.

The publicly-funded project, operated by a company owned by the husband and children of a federal minister, became infamous after discrepancies in the Auditor-General’s Report were highlighted by the opposition, alleging possible nepotism and conflict of interest. 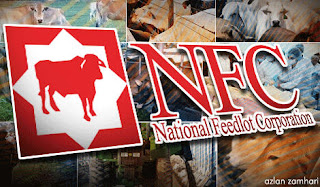