Looking at Anwar Ibrahim, the Opposition Leader, deliver his talk, one would never have guessed that he was hounded by the BN government, on a list of trumped-up charges as long as his arm.

He was witty and informative when engaging with the audience; brutal and incisive when mocking Prime Minister Najib Abdul Razak's administration.

Anwar (right) recently gave a speech at University College London (UCL), entitled ‘The Struggle for Justice and Democracy in Malaysia'.

He won over the crowd, who were mainly Malaysians studying or working in England. Anwar has universal acclaim and the ‘mat salleh' who were present can't have attended just because they were curious to see the man whom BN has portrayed as a raving sex maniac, who can't have enough of women, or men.

For a man whose private life has been paraded around the world with the farcical Sodomy I and II trials, and Sex Videos I and II, Anwar did not look like a condemned person.

With steely determination, he told the crowd that he has vowed to clear his name, restore his family's reputation and defend his honour.

BN painted Anwar as a sexual deviant and lined people up to reveal sordid allegations about him. If true, then Anwar should have felt at home in Soho, the racy red light area with its gay bars, porn-shops and fallen women, close to UCL.

But a sexual lunatic he is not.

Anwar who is famed for his skill as an orator, talked passionately about Pakatan's policies, its budget and his vision of a Malaysia that will be shaped by its youth.

He was adamant that the new Malaysia should be governed with transparency, accountability, and where the corrupt would be punished.

He offered no compromise on his party's multiracial policy. He told the students that they were responsible for determining Malaysia's future.

He said: "Everyone is born to be free. Freedom cannot be negotiated." He cajoled and persuaded them: "You must make a stand and exercise your rights...."

He challenged them: "You must learn to ask questions....", and warned them that Najib's administration feared the truth.

He criticised Najib's performance at ‘prime minister's question time' in Parliament: "I asked him repeatedly, when the ISA will be abolished.

I wanted an undertaking that GE-13 would not be conducted before reforms were implemented.... Najib simply smiled. He was unresponsive..... It was like having a dialogue with the deaf..... Why bother calling it ‘question time'?"

He questioned the conduct of parliamentarians when he quizzed BN about the fund meant to help poor farmers, which was pocketed by BN cronies: "There was a collective silence."

He castigated former prime minister Mahathir Mohamad (right), whom he has forgiven for sending him to jail: "He (Mahathir) levelled charges of sodomy against me because this is taboo with the rural Malays." 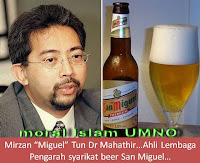 He mocked the religious hypocrisy of the BN elite: "Mahathir's son(right( bought RM2.9 billion of San Miguel shares but one Malay girl had her life torn apart and was herself almost whipped for a glass of beer."

With humility he told the audience: "You may listen to me and choose to agree or disagree with me. Or you can support Umno. It is your right. There is no denying it."

And he injected a bit of comedy in his talk: "For 13 years, BN and the Malaysian media have hounded me, except for three days last Hari Raya.......I had a three day break when they focused on Mat Sabu of PAS."

The Malaysians had travelled from the East Midlands, Shropshire and the North-East, and the majority were students, from colleges and universities in and around London.

Expat Malaysians, concerned about the unpredictable political landscape, came to hear the latest developments. The talk was at times depressing, particularly the part about BN being prepared to cheat, to ‘win' GE-13.

There remained one glimmer of hope; the large presence of Malay students in the audience. For years, the Malaysian government actively discriminated against Malay students.

A culture of fear was promoted by the Malaysian high commissions and embassies around the world. Consequently, Malay students distanced themselves from such talks. Malays are deliberately singled out by BN to keep them ignorant. 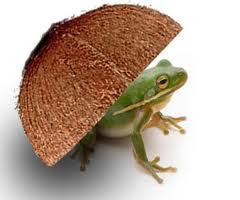 A knowledgeable Malay is dangerous. BN knows that a questioning Malay would ultimately lead to BN's demise. One individual can be silenced. But many?

BN treats the Malay like a semi-literate and a slave. Its brainwashing technique has been perfected so that the Malay mind is trapped by his imaginary tempurung, wherever he is in the world.

Umno's propaganda is based on fear and warns of a threat to Malay survival. BN claims Anwar will sell Malaysia to the non-Malays and that Pakatan is controlled by the Chinese.

What BN really meant was that their own survival was in danger.

The Malay elite is at liberty to be open-minded but he subjugates his poorer Malay cousin. The elite cream off the best in life, but leave others destitute.

In effect, Malaysia has been ‘stolen' by its corrupt Malay leaders.

Informed sources allege that the modus operandi of the consulate officials is to warn Malaysian students to stay away from these ‘opposition' lectures.

Sometimes, the Malaysian embassy sends out ‘warning' letters. But as Anwar related, deans of Indonesian and American universities have cautioned the embassies, and threatened reprisals if this practice were to continue.

Some allege that agents of the government masquerade as students, to spy, as they move in student circles.

Most government scholarship holders are Malay, and many come from poor backgrounds. Only the brazen few or privately financed students will attend ‘opposition' lectures.

Isn't it ironical that students stay away because they fear BN's long reach? This emphasises the significance of Anwar's speech ‘The Struggle for Justice and Democracy in Malaysia'.

Anwar's proclamation which rang in everyone's ears was: "With your help, and given fair and clean elections, Pakatan will form the next government."

Anwar's talk was oversubscribed and the huge presence of students, including many Malays, is heartening.

Perhaps the culture of fear which the Malaysian government tried to export to student populations overseas is vaporising.

Perhaps Najib is not only losing his grip on the economy, but also on the students.

BN's propaganda and emphasis on the sodomy trials, meant that many students were unaware that Anwar was once DPM or finance minister.

Anwar's talk was an eye-opener and many students responded positively. This generation of Malay youth wants a well-rounded education and refuses to be cowed by Putrajaya.

Overseas, non-Malay students have never felt the crippling grip of the BN government. Acquiring knowledge at universities around the world is one thing.

But learning to live with freedom of expression, where basic human rights are not denied and where university professors are not suspended or sent live bullets in their mail, is a shallow learning curve for Malaysian students. - Mariam Mokhtar

is B.A.B.I. Brother Anuwar Bin Ibrahim DONE HIS 5th PILLAR OF ISLAM since he is talking a lot about ISLAM?