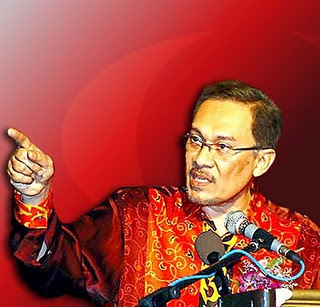 Citing the 30 days’ advance notice provision within the new law, Anwar (picture) said the procedures would be a problem for PR.

“The Peaceful Assembly Bill prohibits, prevents Pakatan Rakyat from explaining to the rakyat about current issues on abuse of power, corruption, discrepancies by the ruling government,” he said.

The Permatang Pauh MP alleged Section 21 (3) of the new law, which allows protesters arrested by police to be fined up to RM20,000 would be used against opposition lawmakers.

“The stipulation which sets a fine up to RM20,000 if found guilty allows the government to drag Pakatan Rakyat MPs to court if they conduct ceramahs, explanations and gatherings which is one of our ways to explain daily issues to the rakyat,” he said.

Shortly after it was unveiled, Pakatan Rakyat leaders said the new bill was “worse” than previous laws on public assembly, and that it simply meant “people could not gather anywhere in Malaysia.”

PR described the Peaceful Assembly Bill as repressive and restrictive of civil freedom, claiming it accords the police even more power to arrest individuals.

Najib today declared it a “revolutionary” law and a “giant leap” towards improving individual freedom.

The prime minister pointed out to opposition lawmakers in Parliament that, under the new legislation, the powers of the police would be capped and punitive action against protestors reduced to only fines instead of jail sentences.

It states that no street protests are allowed, and bars any assembly in or within a 50 metre buffer zone around the listed prohibited areas.

Section 9 (5) of the bill allows the police to fine organisers up to RM10,000 if no advance notice of a planned assembly is given to the authorities.

Section 20 (1) (c) allows for police to arrest anyone who brings or recruits children in an assembly.

The new law says that there also must be 30 days’ advance notice for assemblies except for designated areas defined by the home minister. The assemblies can then proceed unless there is objection by the police.

Simultaneous assemblies may be held, but this is subject to the discretion of the police. If a “counter assembly” should cause potential conflict with another assembly nearby, police have the right to name an alternative location and time for the counter assembly to be held.

Individuals under 21 years of age not allowed to organise assemblies and children under 15 are not allowed to participate in assemblies except for cultural and religious ones like funeral corteges or events approved by the home minister.