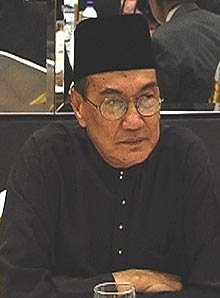 Bukit Gelugor parliamentarian Karpal Singh today asked de-facto law minister Nazri Aziz to explain why no action has been taken against chief justice Zaki Azmi, despite what he claimed was clear evidence of the latter's wrongdoings.

“He said it himself in Kuching... This was told to me by a court registrar,” alleged Karpal, quoting a statement attributed to the chief justice.

In November 2008, the New Straits Times quoted Zaki (left) as saying, “It took me six months to be nice, to bribe each and every individual to get back into their good books before our files were attended to. That was my personal experience, and I am telling this to all the clerks and all the registries to stop this nonsense”.

Karpal contends that this statement is proof that Zaki was involved in bribery. The chief justice was alleged to have made the statement at a convention on 'Integrity, the Catalyst for Sustainable Development' in Kuching. However, Zaki has since denied uttering the statement.

“I have lodged a police report about him. Why is there no action? Can I ask the minister to explain?,” asked Karpal during the winding-up by the minister in the prime minister's department.

Nazri, however, replied that he will have to refer to the chief justice on the matter.

“I have already answered twice on this matter, I will meet the chief justice again about this. I cannot answer on his behalf,” said the minister.

Nazri: 'not my purview'

Padang Serai parliamentarian M Gobalakrishnan then stood up to press him on the matter.

“What is the minister's opinion on this?” he asked.

“My opinion is not important. I will answer after I have met him,” repeated an agitated Nazri.

Puchong MP Gobind Singh Deo then questioned why Nazri would inform Zaki of the allegations.

“Try to listen to what I am proposing. What if you go to a suspect and then tell him that there is a charge against him. What do you think he would do?”

“Don't confuse the issue, I want to see the CJ because he is not here to answer the allegations in the Dewan.”

Karpal then interjected, saying that instead of wasting time talking to Zaki, Nazri should send a police inspector to arrest the chief justice. 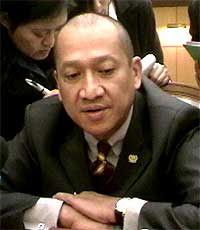 “He is not a suspect, he already confessed to bribery. He should be arrested, sent to court and imprisoned... is the government going to take action?” the DAP veteran asked.

Nazri corrected Karpal, saying that it was not him but Gobind who had called Zaki a suspect, and told the Bukit Gelugor MP to ask the police and the attorney-general why no action had been taken against Zaki thus far, as it is not under his purview.

“I know I am not an inspector, but I'm bigger than that. Inspectors are not called YB, only ministers are called YB,” quipped Nazri.

Nazri clarified that he only announced the matter because the attorney-general briefed him about it. But he maintained he has nothing to do with the decision itself, and does not have control over the police, which is under the Home Ministry.