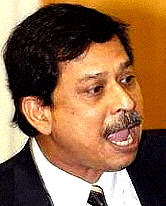 Penang Chief Minister Lim Guan Eng has taken another swipe at state development officer Nik Ali Mat Yunus, continuing their war of words over the recent sand theft exposé in Balik Pulau. In an exclusive 45-minute interview at his office last night, Lim covered a range of issues, including corruption and wastage of public funds.

In doing so, he found an outlet for his frustration with Nik Ali (left), a federal government appointee, who had strongly disputed Lim's “interference” in the civil service. Said Lim, who appeared to be still smarting at being called biadap (rude): “That's why I cannot tolerate people who waste money like Nik. No chief minister dares to upbraid a civil servant. I have been told that I was a 'terror' for doing so.

“I was told that the civil servants will chop you into pieces. You know (what) these civil servants are (like) - they are fearless and untouchable, but I have taken them on.

“Now you know (what) a Little Napoleon looks like, now there is a face to him. He is arrogance personified. I just do not how they are given so much power to control hundreds of millions of ringgit of the people's money.”

Lim claimed that he did not realise the extent of opportunities available for corruption until he took charge of the state administration after the 'political tsunami' of March 8, 2008.

“Only when you are in this position (do) you realise (that) all kinds of opportunities (are) available. Luckily, I have gone through 25 years of sacrifice (in the DAP), (and) these things do not faze me,” he said.

“If I (were) just some young punk, it would be very tempting. Imagine the opportunities! But this is where we can also save money.” 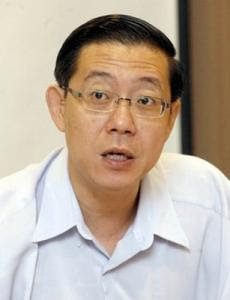 The greatest impact of being in government, he said, is not only to implement policies beneficial to the people, but to prevent and discard opportunities for corruption. Asked if he has been offered kickbacks, he replied briskly: “They know my style, they dare not even ask, and this is good.

“What I am saying is that opportunities (are) available because of our (powers of) discretion. That is why, when we run a clean government, we are able to enjoy what we call an 'anti-corruption dividend'.” One manifestation of the 'dividend' is the state government's ability to pay out RM100 a year as a token of appreciation to all senior citizens, he said.

Lim was also asked to comment on Penang Umno head Azhar Ibrahim's criticism yesterday that he is “immature and inexperienced” in running the state. Azhar, in defending Nik Ali, had said Lim is unable to discern the difference in roles and duties of the state and federal governments. Responding tongue-in-cheek, Lim conceded that he is inexperienced and immature but “only as far as stealing money and corruption” are concerned.

Penang had recently announced a RM36 million cutback or 12 percent savings in operating expenditure this year, attributed to moves to curb corruption over the last two years. These include adherence to the Competency Accountability And Transparency policy and introduction of the open tender system for government contracts. The two municipal councils in Penang are expected to save another RM34 million over three years from “transparent” negotiation of the cost of solid waste disposal. This brought down the rate accepted by the previous BN administration by 42.4 percent.- Susan Loone.

Just because they are PTD officers and appointed by the federal government, it doesnt mean they are untouchable. They can bully UMNO MBs, but dont play,play here!!!