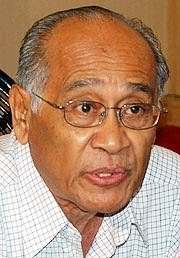 "What ever we may call it, the fact is, prices have gone up," said PKR Senator Syed Husin Ali.

One of the reasons cited for the cut in sugar price subsidy - health concerns - was mocked by him.

"Meat can cause high blood pressure, eggs and butter can cause an increase in cholesterol levels - so is the government going to increase the price for these things on grounds of health concerns?" he asked.

He pointed out that the withdrawal in subsidies, especially for essential goods such as petrol and sugar, only burdened the underprivileged. Yet the independent power producers, get a subsidy of RM19 billion.

"The rich are benefiting but the poor have to suffer," he told reporters at the Senate lobby today, demanding better justification for the recent price hikes.

The argument that the prices of essential items in other countries are higher is also nonsensical, said Syed Husin, who is also the PKR deputy president.

"Besides the subsidy for the IPPs, Approved Permits (APs) are still been given to cronies.

"The government can get a lot of revenue from the APs but they are given out for free," he said.