When Penang opposition leader Azhar Ibrahim spoke up for Malay villages being demolished in Kg Jalan Pokok Asam, little did he realise it would open a can of worms revealing similar eviction crisis, brought about by the federal authorities, in his own state constituency, Penaga. Several other constituencies held by Umno assemblypersons are also suffering similar woes, such as Bayan Lepas and Tasek Gelugor, but the issue has had little coverage in the media. 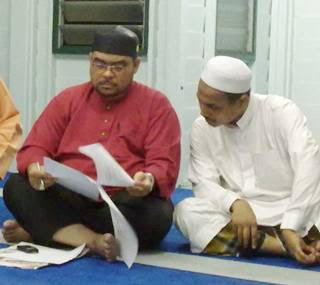 Parit Buntar MP Dr.Mujahid Yusuf Rawa(above in red baju Melayu) demanded that Azhar , who is state Umno secretary, refrain from interfering in the affairs of Jelutong "when his own home is not in order". Mujahid, who is state PAS deputy chief, said several villages in Azhar's constituency had been issued with eviction notices from the federal authorities, and he had done nothing to help the villagers.

He was referring to families from four villages along the Muda river in Penaga who had complained that the federal Land and Mines Department wanted them to move out, even though they had yet to be provided with transitional accommodation. The land on which the houses stand is required for a federal flood mitigation project and representatives of the families have taken their problems to Parliament recently.

On July 8, several villagers from the area turned up at the Dewan Rakyat to meet with their MP, former prime minister Abdullah Ahmad Badawi (BN-Kepala Batas) to get him to raise in Parliament the problem of their eviction. 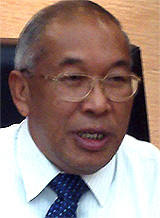 However, Abdullah did not turn up that day, and so the villagers met with Mujahid and other PAS officials who were present.

Natural Resources and Environment Minister Douglas Uggah Embas announced in September 2008 an RM1.2 billion flood mitigation project for the Muda river, which when completed in four years would drastically reduce floods in mainland Penang and in Kedah. Mujahid said the project involved, among others, the widening and deepening of a 40km stretch of the river.

"Please do not undermine our capability to help the affected villagers and do not victimise them," Mujahid told Azhar(left) during a press conference in Penang.

"Please look at your own home. Your wife and children are fighting with you; your wife is not at home and your children have not eaten; go and solve your own problems first before fighting (for the villagers of Kg Jalan Pokok Asam)," he said.

Azhar was recently reported by the media as saying that the Penang Municipal Council had given the go-ahead for development in several Malay villages, such as Kg Jalan Pokok Asam, after Pakatan Rakyat took over the state in 2008. He claimed that when the development of Kg Jalan Pokok Asam was raised during BN's rule in Penang, the state had imposed a condition that approval would only be given once issues of relocation and compensation were settled. But in the case of the Pakatan government, approval was given even before any amicable agreement was reached, added Azhar, who was a former state exco.

Dismissing Azhar's claim as mere "nosiness", Mujahid also took him to task for his role in the "closure" of the 17 Umno branches that claimed they were still active. He called on Azhar to resolve the issue of the controversial branches with their 4,500 members still "stateless and hanging" before interfering in the affairs of Kg Jalan Pokok Asam. "Please resolve this problem before being a busybody. How is Umno going to help the Kg Jalan Pokok Asam people if it does not even have a recognised branch there?" he asked.

Mujahid said the members of the 17 Umno branches were welcome to join PAS as the party had access to the state government to help them in their current predicament.

"We only have five branches in Jelutong, but we have the solid backing of the state to get the villages the best compensation package possible," he vowed. - Susan Loone