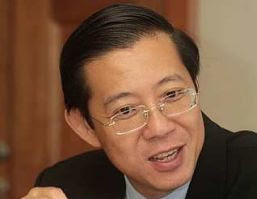 While the embattled state development officer (SDO) Nik Ali Mat Yunos was fuming at a press conference held by Umno over Chief Minister Lim Guan Eng's unflattering remarks about him, the latter was finding more fault with him. Lim, who visited the Penang Botanical Gardens yesterday, where two controversial arches remain an eyesore, charged that Nik Ali, who is a federal government appointee, was "openly and blatantly" sabotaging the state government.

"He is like a little Napoleon in the civil service who gets high pay and does nothing for the people, but instead causes losses to them," Lim told reporters during his visit.

Lim wants Nik Ali to come clean about the RM150,000 plus losses over the planned demolition of the two twin arches recently built for an expansion project under the Tourism Ministry. He holds Nik Ali responsible as he was the "controlling officer in charge of overseeing the project". The arches, one of which is tilting, have been criticised by Penangites and tourists who said these have no cultural or aesthetic value. Following an overwhelming outcry in a poll conducted by the Tourism Ministry, minister Ng Yen Yen ordered that these should be demolished.

Lim has taken offence with Nik Ali for refusing to explain who - which department, state or federal government - was responsible for the staggering losses.

"If he is willing to tell us that, we will not pursue the matter. Every sen counts, because it is a question of public trust," Lim added. 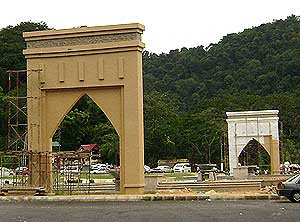 Lim has also seen red over a letter sent by the SDO's office dated Oct 13, 2009 to the Drainage and Irrigation Department, giving a "RM5 million ultimatum" to the state.

The letter states that the state would have to settle "pending issues" on the Botanic Gardens' facade and pavilion development, failing which, federal funding of RM5 million for the project would be withdrawn.

"This is an example of how the SDO's office is trying to rush development projects through without due consultation and feedback," said Lim. Since then, Lim is alleged to have taken Nik Ali to task over several issues including the official opening of the Penang Hill Railway, where the latter was accused of not providing a seat for the CM.

Recently, Lim slammed Nik Ali for allegedly causing a rift between him and Pulau Betong assemblyperson Muhamad Faris Saad, who raised the issue of sand theft at a plot in Kampung Kenanga which had been earmarked for a government polytechnic college. The SDO has responded angrily by calling Lim 'biadap' (rude), saying the latter has no locus standi to evaluate his work.

Pak Jib, tell your civil servant not to be too 'kurang ajar'.....

all u people are being deceive by Lim Guang Eng.His a blood fcking whore

Look like Nik Ali wrong doing in conduct is supported by UMNO Penang.
So instead of solving problem, they condone to this wrong doing in gaining support.