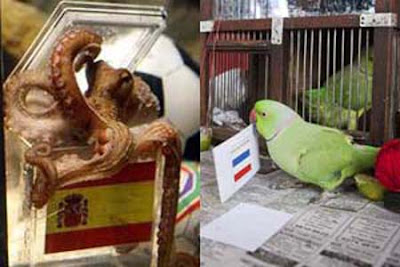 Paul the Octopus is really getting some cult following after his 100 percent correct prediction on the ongoing FIFA World Cup 2010 in South Africa.

But he might soon have a challenger from Mani the Parakeet from Singapore who incidentally have predicted all the quaterfinal ties of the world cup and Spain's semi-final victory over Germany. And the competition hots up between the two with Paul the Octopus picking Spain as the winner and Mani the Parakeet choosing the Netherlands as the new World Champion.

The Psychic Paul the Octopus resides in a German aquarium in Oberhausen, Germany have gained some enemies with most calling for his death after the German's defeat toSpain in the semi-final.

But its a total contrast for Mani the Parakeet from Singapore who belong's to a roadside astrologer Muniyappa, an Indian origin, and the parrot's prediction have helped in Muniyappa's business to flourish.

But fans will be hoping the prediction will not take centre stage when the two best sides meet in the final with everything at stake on Sunday for the biggest prize in world football.

While, Tumpang Sekole's prediction will be 3 - 1 in favour of Netherlands !!