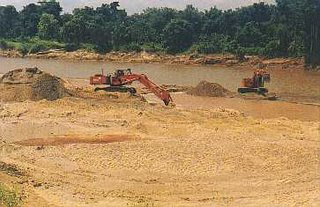 A body representing sand entrepreneurs, contractors and buyers in Selangor has today urged the Selangor Pakatan government not to bow down to pressure from the state BN who are targeting the dissolution of the state-owned sand mining company Kumpulan Semesta Sdn Bhd (KSSB).

The group's chairman, Raja Kamarudin Raja Abd Wahid,fears that if KSSB is dissolved, the licences which they have received from the company will also be revoked.

“We will be suffering huge losses as a result of this. Will Umno/BN (the opposition in Selangor) pay for the losses?” he said when handing over a memorandum to Selangor Pakatan exco member for modern agriculture, natural resources and entrepreneur development Yaakob Sapari.

“What is even more frightening is that the opposition has also called for Selangor not to issue any more sand dredging permits on state land,” he said.

Raja Kamarudin, along with 50 supporters, handed over the memorandum to Yaakob at the lobby of the Selangor state secretariat office in Shah Alam today.

He also asked for more permits to be issued to mine sand on private land.

“Most of the private land in Selangor have been sapu (hoarded) by the BN and Umno cronies.

“What is left for the Pakatan administration are holes in the ground excavated by the BN and Umno when they were in power,” said Raja Kamarudin.

After accepting the memorandum, Yaakob gave an assurance that the Selangor Pakatan government will not bow down to pressure. He said the state government will maintain KSSB to ensure that revenue from sand mining in the state goes back to the government, and that competitiveness and opportunities for contractors continue to exist.

“In the past, there was only one company (allowed to mine sand in the state). Now there are 18 companies which have entered (the business) through open tender with KSSB,” he said.

Yaakob said the Malaysian Anti-Corruption Commission has, since detaining one of the company's assistants, not found any evidence of wrongdoing by KSSB. He also reminded sand operators to abide by the specifications of their licences and stay within the law.