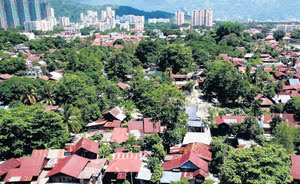 A group of Penang Municipal Councillors has lashed out at Umno for politicising the eviction woes of the Malay community as the result of massive development approved by the party's own leaders in the past. The councillors were referring to the recent eviction case of Kampung Jalan Pokok Assam, where a high-rise development project was approved five years ago, when BN was running the state.

Spokesperson for the group, Yusof Noor, condemned Umno for manipulating the issue by releasing press statements and organising demonstrations against the current state government but its leaders were conspicuous by their absence when the villagers were being thrown out. Yusof Noor, who is also state PAS deputy chief, said it was Pakatan Rakyat leaders in the area - members of the Jelutong Mosque Committee - who negotiated with the developer to extend the eviction deadline, from a week to three months.

They coaxed the developer into giving more time to the residents to leave as the Ramadan month was fast approaching and it would be unfair to leave them in the cold at this juncture. He said the state leadership dissolving the 17 Umno branches left its leaders hamstrung when it came to helping the villagers.

"Where were the heroes of Umno at that point of time? It seems they were not present nor were they around to handle this issue," he said at a press conference at the PAS operations centre in Jelutong yesterday.

"It was Umno which left all these 'solid waste' behind. We do not have the machinery nor the mechanism to handle this big mess left behind by Umno, but we will try our best," he added.

Yusof said if Umno was really interested in helping the villagers, the party should negotiate with the developers and the residents to find the most viable solution.

Instead its actions have induced a state of confusion in the villagers by making it look as if the present authorities were responsible for their problems.

"To Umno, which was responsible for all the mess in the first place, please do not play the black-hooded heroes, because at the end of the day, it is the villagers who are going to suffer," he added.

The group was responding to state party chief Ahmad Zahid Hamidi's claim that the marginalisation of Malay villages in Penang was the heavy price they have paid for the switch in political allegiance. Ahmad Zahid, who is also an Umno vice-president had said that Malaysians, especially the Malays, had to realise that Umno, the backbone of the BN, always championed the interests of everyone. His response came when asked to comment on a newspaper report that about 200 people from the village had been given three months eviction notice by the developer of highrise residential projects.

Ahmad Zahidi's claims, however, were also refuted by several Umno Jelutong branches, which had been dissolved by the party, which claimed that developers were 'persecuting' the Malay community because there was a split in the party.

The high-rise development projects of Mutiara Idaman 1 and 2, and Mutiara Heights, which affected villages in Jalan Tengku, Medan Tengku and Jalan Hajjah Rehmah, which are all in the vicinity of Jelutong are UMNO pet project.

It is the former UMNO municipal councillor who has conspired with developers to approve and allow housing projects that eventually brought suffering to the people due to lack of access roads to their houses here.

Yet UMNO pretends to be an angel,passing the blame to the current govt.