What Bala told the French investigators........ 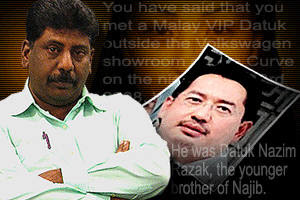 According to Balasubramaniam, he told the French what he knew regarding the alleged Paris meeting between Mongolian woman Altantuya Shaariibuu, Prime Minister Najib Abdul Razak and political analyst Abdul Razak Baginda - who had hired the private investigator to keep an eye on Altantuya before she was murdered in 2006. He was also asked on the payments made by Razak Baginda to Altantuya and the purchase of an apartment in Mongolia by the political analyst for his ex-lover.

Balasubramaniam also explained the role played by Najib's wife, Rosmah Mansor, his brother, Nazim Abdul Razak and businessman Deepak Jaikishan in getting him to change his statutory declaration, which led to his self-imposed exile in India. The private investigator also gave information on the two Special Action Forces personnel - chief inspector Azilah Hadri and corporal Sirul Azhar Umar - who last year were convicted of killing Altantuya.

Balasubramian was also questioned on the alleged French individuals involved in the multi-billion ringgit submarine deal and the details given by Altantuya of payments made by the French to Perimekar Sdn Bhd, the company owned by Abdul Razak's wife Mazlinda Mahmood.

Two Malaysian names cropped up during the questioning - Major Rahim and Abdul Rahim Saad. However, no details were revealed on who they were and what role they played in the scandal. The Parisians are investigating whether commissions have been paid in the RM3.7 billion deal between the Malaysian government and French-based defence company DCNS, which is illegal under the French law.

Below is the statement released by Balasubramaniam on what he told the French investigators.

He was quizzed by them alone as the private eye's lawyer, Manjeet Singh Dhillon, was not allowed to accompany him.

Observation: The French investigator appeared to be very familiar with the events inMalaysia relating to the Altantuya murder. The interview however centred on the Scorpene submarine deal and the alleged commission paid in connection with that.

The following were the areas covered in the interview.

1) My background [including date and place of birth] and my occupation from the time I was with the Malaysian police to the time when I became a private investigator in 1998.

2) The validity of my PI (private investigator) licence.

3) The whole story as to how I was recruited to do a job for Razak Baginda and my interview before the job done by Dhirren Norendra, a lawyer practising in Kuala Lumpur. I was questioned about the scope of my assignment, the target and objectives of my assignment.

4) The background to the Altantuya murder. I briefed them on the events leading up to and after the murder and also told them to read my first SD (statutory declaration) and the Singapore interview. Also the identity of the two police officers convicted of the murder, who they worked for as well as the identity of the various other people identified as being about when Altantunya disappeared and their link to Razak Baginda and/or the PM (prime minister).

5) Razak Baginda's relationship with our present PM, the information and events narrated to me by Razak Baginda including the SMS sent by the PM to Razak Baginda at the point of his arrest for the murder of Altantuya.

8) How Rosmah Mansor teamed up with Deepak to exile me from Malaysia, the threats to my family after I signed the first SD as well as the involvement of the PM's brother in the events that led to the second SD and my being smuggled out of Malaysia and asked to stay away till Najib Razak became PM.

9) I was asked to retrace the events in Rawang coffee house where Deepak, Dinesh and ASP Suresh were present.

10) The length and time I have been in exile.

11) Details concerning Altantuya's cousin, Ammy, who had knowledge of the Paris dinner where the PM and Razak Baginda were present with Altantuya.

12) The identity of the French individuals involved in the Scorpene deal.

13) My knowledge of any payments by the French to Perimekar and information given to me by Altantuya that her US$500,000 was because of the successful deal concerning the Scorpene submarine transaction.

14) The identity, background and involvement of two Malaysians identified as Major Rahim and Abdul Rahim Saad.

17) The need for justice to be served for the Altantuya murder and the truth to be told concerning the Scorpene deal.

I signed the statement that the French officer recorded.

Balasubramaniam also said that he met with Breham, the French lawyer acting for Suaram, on July 13 at 10 am at his office at Cabinet Bourdon-Voituriez-Burget, 156 Rue de Rivoli, Paris.

Who are Major Rahim and Rahim Saad,read here.

Another sleepless night for Pak Jib and his beautiful spouse.....