'Federal officers' choose to kowtow to the UMNO tuan..... 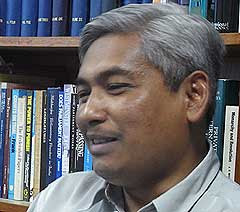 The root of the problem behind the verbal brawl between Penang Chief Minister Lim Guan Eng and the state development officer is that the latter chooses to be a political tool of the Barisan Nasional, says political analyst Abdul Aziz Bari.

The outspoken Abdul Aziz said the accusation by federal appointee Nik Ali Mat Yunus that Lim was "rude" was a classic example of the long list of problems in the working of federal agencies in states under Pakatan Rakyat, where BN is the opposition. Nik Ali had obviously breached the regulation that a public servant shall not make public statements, he said.

"But the problem is that he is a federal officer and we know for a fact that the federal public service would not do anything against the officer despite the offence he committed," Abdul Aziz said.

"This is the dilemma; this is the problem when we have a government that does not care about the constitution," he added.

Recently, Lim and Nik Ali has been at loggerheads over several issues, with Lim accusing Nik Ali of "openly and blatantly" sabotaging the state government.

Nik Ali had responded angrily by calling Lim "rude" while state Umno leaders have readily defended him, accusing Lim of being "inexperienced and immature" in running the state. The controversy was sparked by allegations of sand theft in Balik Pulau, exposed by Pulau Betong assemblyperson Muhamad Farid Saad, following which Lim passed the responsibility to Nik Ali, since the matter involved land belonging to the federal government. Abdul Aziz also said that in Malaysia, public servants were working to save the BN government and at the same time, helped to undermine the Pakatan.

"This is not constitutional democracy but constitutional anarchy," he said, pointing out that in the United Kingdom, the Labour government allowed public servants to brief Conservatives and Liberals who were trying to form government after the April elections that resulted in a hung parliament. A similar problem pertaining to state legal advisers was highlighted by Opposition leader and PKR supremo Anwar Ibrahim recently.

"The root of the problem is this: instead of carrying out their functions and duties according to the law, the federal officers choose to become political tools of the BN-led federal government," said Abdul Bari.

The existing problems created by federal agencies like the police and Malaysian Anti-Corruption Commission continue to persist, he said, adding that these agencies created havoc in Kelantan, Terengganu (1999-2004) and then in Perak last year. The federal government, he said, set up the Federal Development Departments illegally, apart from the village heads appointed by the Rural Development Ministry.

"For example under the Police Act 1967, the job of the police is to carry out the law of the land; irrespective of whether it is federal or state," he said.

"But the police, as we have seen in Terengganu in 1999, have arrogantly said they were not going to do that - as the state Chief Police Officer Othman Talib had put it.

'Public servants must serve government of the day' "Strange enough, in the BN-led states the police are often willing to carry out orders from the state government, even though these are just policies or executive orders and not law enacted by the state assemblies."

Constitutionally speaking, Abdul Aziz added, public servants - including members of the armed forces and police force - were there to serve the government of the day, whatever their colour and shape. 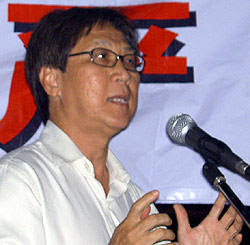 Centre for Policy Studies director Lim Teck Ghee concurred with Abdul Aziz that similar problems existed in other Pakatan-controlled states, with federal officers beholden to the federal government for their mobility and career prospects.

"The particular SDO (Nik Ali) is not only likely to be backed by his superiors in the federal civil service but he is probably also seeing this as an opportunity for rapid upward career mobility," said Lim, when asked to comment on the row.

"The issue of political bias in the civil service is a structural one that will continue to rear its ugly head until the necessary reforms to kill it off are implemented."

Lim said current rules and regulations governing the conduct and actions of civil servants in all sectors - whether in the legal service, police, Election Commission, Malaysian Anti Corruption Commission or development agencies - have been grossly ineffective in ensuring that the principles of political and administrative neutrality are observed.

"Until there are stronger measures to punish or censor such partisanship and political bias, I am afraid we will be considered a third-rate democracy.

"I hope the Pakatan parties, together with enlightened individuals from the BN, can come together to work on shaping this important and long overdue reform to ensure neutrality of the civil service," Lim added.

This is not only a Malaysian problem.All over the Thrid World the Civil Service is no longer civil and provides no service when the opposition takes over power.I do not have to list the number of Asian and African countries that are suffering from this problem. And I do not also have to point out their low ranking in the Global Developnment Index. In many of the Third World countries, except Malaysia, this close networking between the civil service and the politicians coupled with even more sinister collaboration with the private sector has winessed large scale brigandage of state fund that have been skillfuly transfered to Banks in the First World with or without the knowledge of the receipent governments.

This call for close cooperation between the Civil Service and the Private sector overseen by the politicians will mean that many of the Third World Countries will will continue to be ruled by one party for the rest of their history.

Third World countries need strong institutions of government to ensure that there is adequate protection of the freedoms of the individual because those freedoms are at the core of our creativity. I just cannot understand why Third World countries continue to follow the path of the failed communist states of Eastern Europe.We must have the wisdom to do at the beginning what we will be forces to do unsuccessfully in the end as clearly shown by the failure of the socialist experiment in Eastern Eorope. That my friends is the difference between a wise man and a fool. The wise man does at the beginning what the fool does at the end.Ramalx