On July 7, 2008, private eye P Balasubramaniam celebrated his wedding anniversary being interviewed by police officers for about six or seven hours at the Malaysian embassy in Bangkok. Last Tuesday, he celebrated his anniversary being interviewed in a press conference under far more relaxed circumstances in London. The supporting cast and the location may have changed, but the focus remained the same. Yet what has often been relegated to a footnote has been the tribulations of the man himself.

"Everybody's focusing on the murder of Altantuya Shaariibuu and who's behind it," says Balasubramaniam's lawyer, Americk Sidhu.

"There's another issue here which is equally important, and that is the way Balasubramaniam was treated after he released his first statutory declaration on the July 3, 2008. He was immediately apprehended, bribed, cajoled, threatened and removed from Malaysia."

The video of Balasubramaniam's interview in Singapore last November by three of his lawyers gave lengthy details regarding his experience starting from July 3, 2008.

Among the chilling allegations made by Balasubramaniam were the words said to him by Nazim Abdul Razak(left) , the younger brother of the prime minister, during a meeting near The Curve in Damansara on the night after he released his first statutory declaration (SD): "If you love your family, just follow what Deepak (Jaikishan) tells you to do."

This kicked off a whirlwind journey for Balasubramaniam that had him hurriedly retracting his first SD with a second SD, his children getting new passports, a van shipping him and his family straight to Singapore's Changi Airport where he boarded a plane to Bangkok - all within 24 hours. 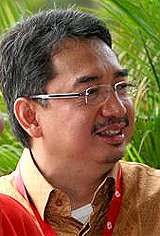 After the interview by, oddly enough, commercial crimes police officers, he would then fly with his family to Kathmandu, then New Delhi and finally settling in Chennai, India where he stayed for over a year, his expenses funded by the shadowy and politically well-connected businessman, Deepak Jaikishan. Balasubramaniam now believes that the likelihood of him returning to Malaysia is slim.

"If I go back to Malaysia, I got a room in Kamunting waiting for me," he says. "I can't go back. They will silence me, or they will put me in Kamunting for nine to 10 years." Balasubramaniam feels his only hope for a return to the normal life he enjoyed back home is with a change in government. "I don't want these corrupt Umnoputras to be in Malaysia. I need the government to change."

In the Singapore interview, Balasubramaniam claimed that "Deepak said I can come back to Malaysia after Najib becomes PM." This became untenable when Balasubramaniam insisted he wanted the truth of his testimony as a witness in the Altantuya murder case to be revealed.

How he and his family had emerged from an imposed silence in Chennai to a public (and globe-trotting) reaffirmation of his first SD depended on one moment of providence.

"The turning point was Deepak giving back my passport (in February 2009)," Balasubramaniam told Malaysiakini after the Tuesday's press conference in London. As his visa in India had expired, Balasubramaniam threatened to kick a fuss at the Malaysian High Commission in India. Deepak relented, and with his passport in hand, Balasubramaniam had a plan in mind.

On July 19, 2009, he called his lawyer, Americk Sidhu, who was in Wales, UK at the time. On Americk's advice, Balasubramaniam went to Kuala Lumpur on July 28 to meet the lawyer. This he achieved through a long route - flying from Chennai to Bangkok to Hat Yai. Then a motorbike taxi took him through Bukit Kayu Hitam, one of Malaysia's many notoriously porous northern border checkpoints where one could zip through without immigration scrutiny.

He made his way to Kuala Lumpur where he called Dinesh Jaikishan, brother to Deepak, to say that he was in Malaysia purely to meet his family, who had returned home earlier. Balasubramaniam's tactic here in being open about his visit was as a way to assure the Jaikishan brothers that he did not have ulterior motives. He spent 10 days in Kuala Lumpur conferring with Americk before returning to Chennai through the same route he had arrived. 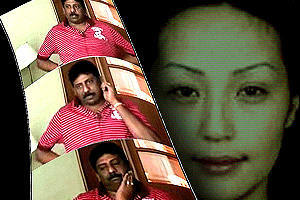 In October 2009, Balasubramaniam came back to Malaysia again, this time with the intention of bringing his family to Chennai. On the advice of Americk, he flew straight to Kuala Lumpur International Airport (KLIA), because he wanted to "test" if his passport would be flagged. It was.

"SB (Special Branch) officers came running towards me," said Balasubramaniam. "They brought me into their office (in KLIA). I thought they would put me in Kamunting." But he made a call to Deepak, and when the Special Branch officers called their superiors, they were told to let him go.

After about another 10 days in Kuala Lumpur, Balasubramaniam left Malaysia for the last time ever since. His family followed him in another flight a few days later. While he admits that the danger of being 'silenced' is ever present, Balasubramaniam feels safe in Chennai where, his lawyers joke, "half the people there look like him". But he rubbishes claims he is in hiding. "I don't consider myself as a fugitive. What wrong have I done?"

Regarding his finances, Balasubramaniam has made it clear he has been living off about RM750,000 in total funds received from Deepak for over a year since July 2008. "I flew here (London) with Deepak's money," he said. The cost of holding the press conference and his hotel stay was paid for by donations from supporters. Americk asserted that there isn't one single personality or party financing the London exercise.

Balasubramaniam insists that his actions immediately after he issued the first SD have been guided by a concern for his family. "I can't be bought," he said. Now that he feels more assured for the safety of his family, Balasubramaniam is motivated by another concern: "I want the truth to come out... MACC not turning up shows that they don't want the truth to prevail." - Danny Lim