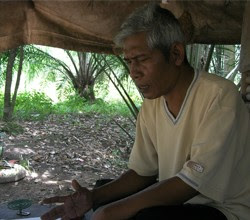 Perkasa, whose pro-Malay rhetoric has upset many Chinese, Indians and even Malays, has found itself another opponent — the Orang Asli. Dewi Malam, a Tok Batin from Kampung Orang Asli in Pulau Kempas, said Perkasa had robbed his people of their identity by using the word “pribumi” in its name.

Perkasa is short for Pertubuhan Pribumi Perkasa Malaysia, which can be translated as the Malaysian Organisation for Mighty Natives. It is headed by controversial politician Ibrahim Ali, who founded it as a body to defend Malay rights and privileges.

“But pribumi means orang asal (original people),” said Dewi. “They are the original owners of all the land in the peninsula. They do not have to pay for the land because they are its owner.

“That is what a pribumi is. He is master, sultan, king.”

Dewi said pribumi is not synonymous with Bumiputera, a word coined by Malaysia’s first premier, Tunku Abdul Rahman, to refer to the Malays and indigenous peoples.

Dewi, a Temuan tribesman, said that even the word Melayu had been abused. According to him, it is a Temuan word meaning “the people who work” and originally referred to six related pribumi tribes: Kuala, Kanaq, Seletar, Jakun, Semelai and Temuan. - Rahmah Ghazali and Hisyam Salleh