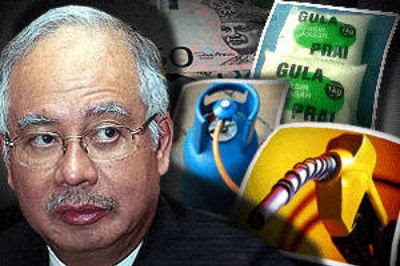 Prime Minister Najib Abdul Razak yesterday attempted to preempt a public backlash over the '5-in-1 price hike' by discouraging the press from using specific words in their reports. During a special briefing at the Prime Minister's Office in Putrajaya afternoon yesterday, editors were told not to use the words "price hike" or its Malay equivalent "harga barang naik".

Instead, they were told to use the words "upward price adjustment" or "subsidy rationalisation". The briefing was conducted by Najib's (left) media advisors and several participants told Malaysiakini that it was a friendly atmosphere.

"They politely appealed for our cooperation, but the subtle spin was too obvious to ignore," said one participant.

The media advisors encouraged the press to explain the "rationality" of the subsidy cuts in their news reports and also prominently highlight the fact that Malaysia's fuel and sugar prices were still the lowest in the region.

Furthermore, the press were advised not to conduct street polls and some participants claim that there was obvious hints opinions should only be sought from pro-government NGOs and consumer groups.

Interestingly, sources said that the media advisors also requested that the press not use the word "government savings" in their reports.

"The officials said that this will prompt the public to ask where the savings had gone into. The emphasis is to highlight reduction of expenditure rather than savings," said a source.

In 2005, the Abdullah Ahmad Badawi administration had claimed that subsidy cuts for water, energy and fuel would help the government "save" RM4.6 billion. Abdullah pledged that the "savings" would be spent on improving public transport, but critics have pointed out that there was no evidence of such. One media advisor even went to the extent of suggesting that the press play up Najib "boldness" in undertaking subsidy cuts.

Unlike previous years, the government appeared to have meticulously planned its propaganda efforts to reduce public outcry over the simultaneous price hikes in fuel, sugar and gas. Yesterday, Najib's 12-point announcement stressed that the price hikes were necessary to curb a burgeoning government deficit, root out smuggling and, creatively, stating that the move would help reduce sugar consumption to help keep Malaysians healthy. He said that the money saved from government subsidies would be spent on ensuring better healthcare and education, which are still heavily subsidised.

This was followed by a statement from government think-tank Performance Management and Delivery Unit (Pemandu) which claimed that Malaysia's favourite beverage - teh tarik - should only cost 1.25 sen more. Even though the editors were briefed at 4pm, they were urged to embargo the news - including on its online versions - until the premier issued his statement at 8pm. 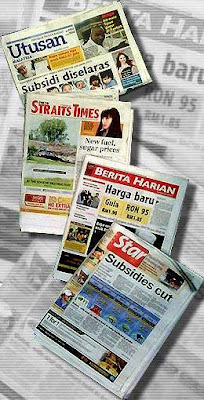 A cursory glance at all the newspaper front pages today indicated that most media organisations heeded the premier's requests. Utusan Malaysia headlined 'Subsidi diselaras' while Berita Harian went with 'Harga baru'. Sinar Harian went as far as burying the news in page 4.

The six peninsula Chinese dailies, which are traditionally more independent, only one used the words "price hike" on its front page. The other five preferred to call it "new prices".

Umno-owned English daily NST carried the news on its front page with a sub-heading which reads "but they are still among lowest in the region".

Tamil dailies Makkal Osai and Tamil Nesan (the latter owned by MIC) did not carry any news about the price hikes. 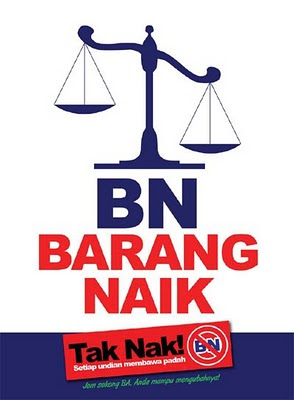