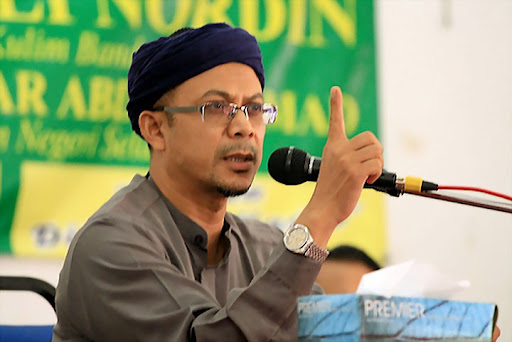 The group had gone inside the school compound to stop the event - which centred on the bloody Lahad Datu incident, and the use of the word ‘Allah' in Malay Bibles.

It is learnt that the group had been protesting that the ceramah - which was political in nature - was held in a school, when such premises are out of bounds for politicians.

Hundreds of protesters - spotted among them, state PKR Youth chief Amir Ghazali (left) - had gathered around the school compound since 9pm, but their intrusion had been later put off by a 100-strong police force.

The event featured, among its speakers - Kulim-Bandar Baru MP Zulkifli Noordin who turned independent after being sacked from PKR in 2010 and Muhammad Zahid Md Arip, a vocal spokesperson of NGO Tolak Individu Bernama Anwar Ibrahim (Tibai).

Both speakers were able to present their speeches despite the noisy protest outside, while police nabbed a senior citizen for trying to create trouble, though the latter had been released afterwards.

On the other hand, Central Seberang Prai OCPD Azman Abd Lah claimed that there had been no arrests as it was a "normal (situation) during the election season".

"There is no chaos, only a little disruption. We had deployed police officers, including the Light Strike Force personnel," said Azman.

According to eyewitnesses, several protesters turned rowdy when they entered the school compound and hurled provocative words and eggs at the ceramah's audience. However, there were no physical clashes and the crowd dispersed after midnight.

When contacted, state PKR chief Mansor Othman said the gathering of protesters had been "spontaneous" as many were angry about the political ceramah being held in the school, denying that PKR organised it.

"The local residents lodged a police report about that yesterday afternoon, but the police did not respond. Also, this is the home ground of PKR supremo Anwar Ibrahim who keeps being slandered by Umno; there is certainly a limit to the people's patience," he told Malaysiakini.

"When some gathered outside the school last night during the ceramah, many others, such as their neighbours and other kampung folks joined them too."

Guar Perahu falls under the Penanti state seat, which is one of the constituencies under the Permatang Pauh parliamentary seat, currently held by Anwar, who has been recently besieged yet again by photographs circulating on the Internet of his alleged exploits with a man.

"The police and the state education department are practising double standards. They do not allow us to go into schools to talk, yet they allowed those who are pro-BN or BN leaders to do so," added the Penanti assemblyperson.

Mansor (right), who is also Deputy Chief Minister I, said he will lodge a complaint with the state education department on the matter of the double standard treatment favouring BN.

The incident comes after the party's vice-president Tian Chua was harangued twice, in Penang and Lunas, since Friday when he had been doing his rounds at several ceramahs in Penang.

Tian Chua caused havoc when he allegedly made statements that the shootings in Lahad Datu was a planned conspiracy by Umno to divert attention and frighten the people.

He is current facing charges under the 1948 Sedition Act for his remarks, which he denied had been meant to insult the sacrifices or the contributions of the police and armed forces, many of whom have died in Lahad Datu.

'Organisers not respectful to local residents'

Expressing regret over the incident today, state PKR Youth vice-chief Dr Afif Bahardin said the attack was motivated by the organiser's actions which were not "respectful or sensitive" to the residents of Guar Perahu.

He urged the authorities to prohibit such activities in public premises, and demanded that they be "neutral" and not practise favouritism towards the BN in their actions or  decisions.

"The incident could have been avoided if the organiser and the authorities (police) had taken pro-active steps to prevent it. They wouldn’t have organised such an event if they had understood the dynamics and the sensitivities of the local community," said Afif.

"It is not the first time that Umno and BN have misused public venues for their political events and to spread lies and slander about Anwar," he added.

Afif also said not only schools but institutions of  higher learning and polytechnics in Permatang Pauh and Seberang Perai have been used for such purposes, adding that students were also "forced" to attend these programmes.

He urged the authorities to prohibit such activities in public premises, and demanded that they be "neutral" and not practise favouritism towards the BN in their actions or  decisions.

"The authorities should maintain harmony among communities, and not bow to pressure or orders from Umno or BN leaders," Afif added.-malaysiakini