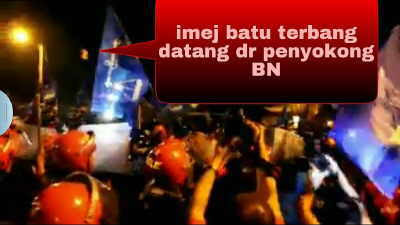 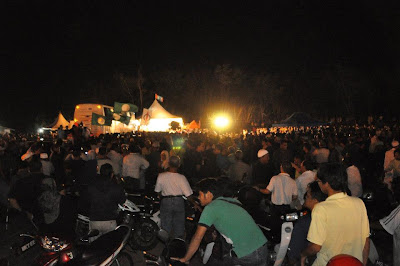 Bloodshed during Pakatan ceramah in Malacca...

In yet another incident of political violence, at least one Pakatan Rakyat supporter was injured at a ceramah last night in Bukit Katil, Malacca after it was disrupted by thugs said to be from Umno.

A photograph posted by Pakatan supporters on Facebook shows a man bleeding profusely from his head after being hit by a stone.

“I saw bottles thrown and I could avoid them, but I could not see the stone thrown, that's why it hit me,” Ghani is quoted in the statement.

He also expressed regret that the police did nothing to stop the violence.

“They threw stones right in front of the police, but police just ignored this,” Ghani said.

Rasah parliamentarian Loke Siew Fook, who spoke during the ceramah, said Umno held a counter-ceramah at the same venue.

"I just arrived in Malacca for the PKR Bukit Katil ceramah with (Opposition Leader) Anwar Ibrahim.

Thousands of people were there," the DAP leader tweeted late yesterday.

"Umno has a counter-ceramah nearby, which was attended by only a few hundred people. This is the action of those who fear losing (the general election).

The rise of the rakyat to oust the BN regime will continue. They will not bow to Umno's intimidation," Loke said

The windscreen of the PKR campaign bus was also shattered during the incident, it was claimed.

This is not the first time the campaign bus was stoned by assailants. It suffered damage in a number of other locations previously, including in Perak, Johor and Kelantan.

Riot police were brought in to restore peace, but they had a tough time controlling the intruders.

PKR secretary-general Saifuddin Nasution is to call a press conference on the incident at the party headquarters in Petaling Jaya this morning.

On Sunday, another ceramah was disrupted by BN supporters in Teluk Intan, Perak.
MP M Manogaran had to be escorted out of the DAP ceramah venue  by police after a group of intruders carrying BN flags, numbering around 40, gatecrashed the function and hurled abuses at Pakatan leaders.-malaysiakini

Malacca folks may be shifting at last...

Malacca is said to be impervious to the reformasi wave of Pakatan Rakyat, unlike its northern neighbour Negri Sembilan, which is rumoured to be teetering on the brink while southern cousin Johor, long a BN bastion, is reportedly rife with Pakatan's insurgency.

So when the Pied Piper of change came a-wooing to three parliamentary constituencies in this sleepy hollow last night, the impressively large crowds that showed up may well mean that Umno-BN's serene invulnerability in Malacca is in for a buffeting at the coming 13th general election.

An initially small crowd of about 500 at Machap Umno in Alor Gajah swelled pretty quickly to a rousing 3,000-strong by the time Pakatan campaigner-in-chief Anwar Ibrahim was 15 minutes into his oratory at 9pm.

Normally, Anwar does not do a full hour at his first stop, if there are two more on the cards for the night.

But at Machap, a state ward that's likely to be contested by PKR's Ginnie Lim, one of the young 'uns in the party being nurtured for the big time, the Pakatan drum major went the full 60 minutes, with a rare mineral water break the crowd felt he fully deserved.

It was mixed-race crowd that reacted with applause to every punch line of Anwar's, so when the now-customary video screen beside the speaker's platform showed Prime Minister Najib Abdul Razak with relatives of the Sulu sultan at the Umno general assembly last November, the crowd chuckled as Anwar made the point that in these days of video technology, it's not easy to get away with a false accusation.

Anwar's portrayal of himself as the hapless victim of relentless Umno-BN demonology - in its most recent instance as having colluded with the intruders at Lahad Datu - drew the crowd's sympathy upon their viewing Najib on the screen surrounded by Sulu dignitaries.

Digital media, like video technology, has been a boon to Pakatan but one needs the subtlety to go with the technological props.

Here Umno-BN appeared bereft because at Anwar's next stop at Bukit Katil, in the parliamentary ward of the same name, the ruling coalition staged a rally across the road from the site of the PKR one.

While Anwar held forth before a crowd of about 8,000 on issues of corruption and abuse of power, the speaker across the road spewed vile invective on his sexual orientation, his supposed amassing of wealth when he was finance minister, and rumoured relationship with the wife of one of his senior lieutenants.

The shrewish voice appeared to belong to a member of the retinue which has made itself infamous for the accusations they routinely hurl at the Pakatan leader, except that in this instance the people who were headed for Anwar's ceramah simply smiled at one another from wry amusement than disdain, at the spectacle across the road.

It was small crowd at the BN rally, tiny in comparison with the one gathered to hear Anwar, but the police lined their patrol cars on the road separating the two events to prevent BN-flag waving attendees from getting overly ardent for their own good.

But it did stop a scuffle from breaking out when part of the BN crowd sought to gatecrash the Pakatan ceramah, resulting in an opposition supporter allegedly being hit by a stone, resulting in an ugly head wound.

The plethora of accusations against Anwar hurled by his adversaries over the years has made ordinary people pay attention to what is being said and by whom with the possible result that they have become more discerning about what is kitsch and what is cool.

As soon as Anwar had finished at Bukit Katil, his motorcade swept off to Sungai Udang, near the military camp at Terendak, where the recent inductees to the Pakatan cause from retired former top military brass had warmed up the crowd with their evaluation of the state of our national defence and the intrusion at Lahad Datu.

Anwar was running late for this final stop, the consequence of excessive oratorical enthusiasm for the outsize crowds at Machap and Bukit Katil.

It was midnight when he finished at Sungai Udang, his wind-up speech retailing the main points he dwelt on at the earlier stops, with emphasis on the ineptitude, he argued, that has characterised the government's handling of the Lahad Datu intrusion.

His Malaccan audience at his three stops had much to mull over for the night.-Terence Netto,Malaysiakini 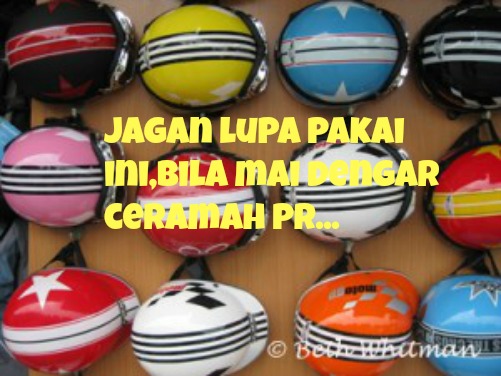