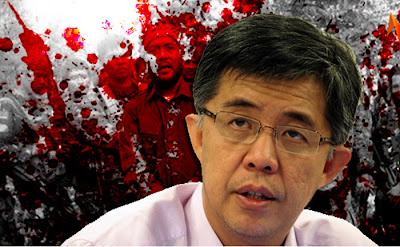 Please allow me, and ordinary voter to state my case on the above issue. Why does it take more than 200 police reports to take Tian Chua to Court whereas one would be enough if he had really committed a crime against our country?

Two hundred polices reports, wasting the time of police personnels who are better spent chasing after the Suluk Terrorist at Lahad Datu, and presented by UMNO linked NGO's parading in the streets to glamourise their action using large numbers to seek sympathy and votes, which itself proves what Tian Chua said. A gigantic piece of Sandiwara, UMNO style.

Two hundred plus police reports which also shows the mentality of UMNO who cannot distinguished between quality and quantity. Ever since I got to know UMNO, to them quality means quantity or if they are incapable of producing quality educations, they make up by forcing a quantity of subjects to our students such as getting 18 As, all for nothing except glamour to make the UMNO leaders appear good.

Back to the Lahad Datu Issue, all of us rakyats know that Tian Chua referred to the incident before anyone was shot dead and the fact that there was no immediate action against the intruder which is a smacking of Sandiwara for sure.

No one in their right mind would make fun of our security personnels, police or army in such a situation but Tian Chua has every right to point fingers at UMNO leaders. So tell me what crime is he really charged for in court?

Sabahans are still in fear now from the presence of the Kiram bin Tiram supporters who could be hiding anywhere in every corners of Sabah just waiting for the right time to take over this state or create further damages and destruction.

In other words UMNO has been playing Sandiwara with the lives of us Sabahans for the last 50 years for ignoring our protest against the large influx of illegals from the Pinoy country bringing with them all sorts of diseases and the violent culture of pirates, robbing, raping and smuggling all kinds of drugs and weapons, all of which had been ignored by the BN leaders.

Dr Chong Eng Leong has been showing tons of proofs at every public gathering and yet the useless Huguan Siou even kicked him out from PBS. Books by MD Mutalib also has been belittled by BN but now when all our fears have been proven true, as expected of UMNO the first thing they do is look for a scapegoat to divert the public attention from the real issue, and this time the convenient scapegoat happens to be Tian Chua.

Scapegoating started during Mahathirs reign of terror using Operasi Lalang and lots of others.

And while the Lahad Datu mopping up operation was declared a success, suddenly more firefights and more deaths occurred showing the incompetence of the BN leaders in handling the issue from the very beginning. So they started looking for old photos of opposition leaders seen with some pinoy leaders in the past but conveniently forgetting that they too have invited the Kiram bin Tiram families to join their family parties in the past.

And while all these are happening, I receive verbal reports from my doctor and nurses friends from the public hospital that even the illegal philipinos still getting treatments at our tax funded hospital are sneering at our hospital staff, saying that their people will be taking over Sabah soon and all the existing Sabahans will be their slaves and servants.

To all the UMNO leaders, I have this to say to you. The more you take action against the opposition, the more street protest you organise, the more I hate all of you because those are the very proof of your Sandiwara just to ensure that you hang on to power.

You try to get sympathy from the loss of lives of our brave cops but in reality, what is the death of 10 or even 100 soldiers to you? Even for the President Obama, what is a few hundred dead soldiers in Afghanistan to him? They are not his children.

Ordinary men in uniforms have been pawns in the games of politicians all over the world and why should you guys be any different? By the way, whatever happened to the Altantuya case? Until today we still do not know who ordered her blown up.

Isn't that a part of the Sandiwara, which is sometimes referred to as the BIG PICTURE by some big talking Datuks who only care for the millions RM of contracts they get from you?

Enough is enough UMNO, no matter what you do from now on, it is TUKARR all the way and only the idiots cannot see through all of your Sandiwara.

To the editor of Sabahkini, if you cannot publish this letter, at least pass this to Tian Chua and co. since I am unable to contact them. I expect Tian Chua to fight on in court or outside and NEVER apologise for something that you said was correct and accurate.

If someone should organise a public fund for his defence in court, I would be the first to come forward to donate. - JOHN, A PENAMPANG VOTER, Sabahkini

Greetings I am so grateful I found your weblog, I really found you by mistake, while I was browsing on
Digg for something else, Anyhow I am here now and would just like to say thanks for a
fantastic post and a all round exciting blog (I also love the theme/design), I
don't have time to look over it all at the minute but I have bookmarked it and also added your RSS feeds, so when I have time I will be back to read much more, Please do keep up the superb work.