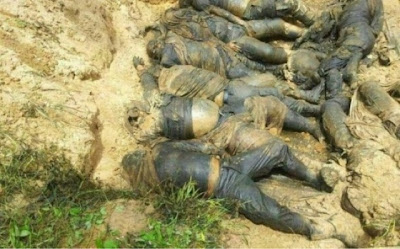 The government today released three photographs of dead Sulu intruders in Kampung Tanduo while confirming that at least 13 enemy combatants are dead.

"This is released to show that what is ongoing is real and not a figment. This is the reality on the ground," said Home Minister Hishammuddin Hussein at Felda Sahabat Residence, Lahad Datu.

Defence Minister Zahid Hamidi, who was also at the press conference, showed a picture of nine dead bodies piled up together.
Another photograph showed the corpse of a combatant that was killed this morning.

A final photograph showed a burial ground which did not depict any dead bodies, but the "mopping up" operation revealed that three bodies were inside.

"The dead we (are) confirming are only those in photographs which we deem are non-sensitive (for public) release," said Hishammuddin (right in photo).

However, he declined to confirm the total figures of Sulu casualties other than what was presented in the photographs.

Other than the one fatality this morning, it is uncertain whether the other 12 persons died during the dawn raid yesterday or during the gunbattle last Friday.

The authorities have kept mum on the casualty figures in yesterday's air-and-ground attack other than stating that no Malaysian combatant was killed.

In the firefight on Friday, 14 people were killed - 12 intruders and two police commandos.

Cause of death unknown

A total of five photographs were released with the others showing a row of confiscated weapons and another of a forensic team at work in the operation zone.

"These (pictures were captured) during the mopping up operation, inch by inch, as we go in," he said.

However, Hishammuddin refused to reveal how the other 12 men died other than the one who was shot dead this morning.

"The forensics will do their investigation and they will reveal in detail later, don't speculate," he said when asked if they died from being bombed or shot.

Zahid said information and visuals are trickling in slowly as security forces search the area.

"The terrain is difficult so do not underestimate (the challenge) but we are confident of our police and armed forces (to finish the job).

"Do not belittle their efforts, I would like to stress the cooperation with the police and armed forces has been successful," he said.-malaysiakini

Security forces have moved into Tanjung Batu, the neighbouring village of Kampung Tanduo where an operation to weed out Filipino intruders first began yesterday.

"There, gunfights occurred. We believe we have killed some enemies there but we cannot confirm the numbers at this moment," Inspector-General of Police Ismail Omar (left) told a press conference at Felda Sahabat residence this evening.

Tanjung Batu villagers had claimed that their village - which is about 5km from Kampung Tanduo - was taken over by around 50 intruders as early as Monday, triggering a mass exodus on the very day.

This was the day before the air-and-ground strike of Kampung Tanduo, where more than 100 intruders were believed to have holed up.-malaysiakini
Pasukan keselamatan perluas operasi ke Tanjung Batu