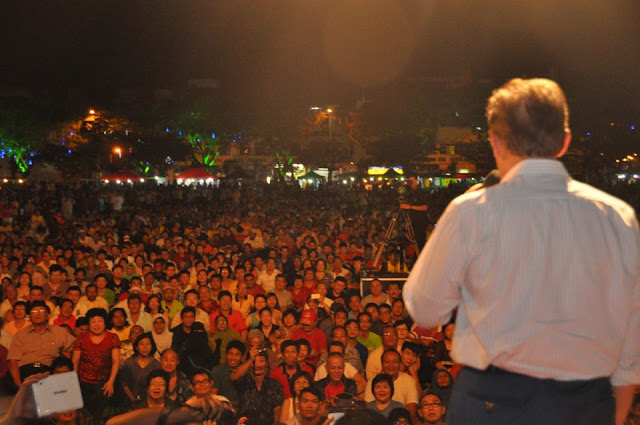 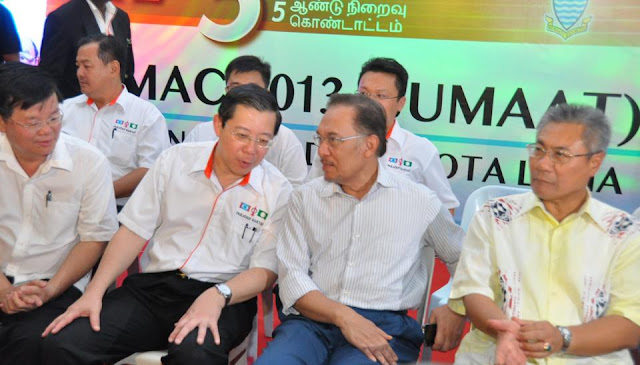 A mixed crowd of over 15,000 turned up at Pakatan Rakyat's 308 fifth anniversary do at the Esplanade last night to recount the coalition's victory in capturing Penang from BN in 2008.

The 2008 polls results dubbed ‘political tsunami’ saw five states, including Penang fall to Pakatan, while the BN lost its two-thirds majority in Parliament.

The crowd occupied more than half of the Dewan Bandaraya field, which take about 20,000, though it was half the number of those who attended the Han Chiang College rally hours before polling day in 2008.

Chief Minister Lim Guan Eng, who arrived on the field after 9pm to loud cheers, was happy with the crowd's response, tweeting that he estimated their numbers to be about 50,000.

t is still not certain if the glowing numbers were an indication that Pakatan would repeat its performance in 2008 when it swept 29 out of 40 seats.

Opposition leader and PKR supremo Anwar Ibrahim, who was the last speaker, was in top form when he arrived, drawing a comfortable cheer from the crowd as he thanked Penangites for the March 8 victory.

"I salute the rakyat of Penang, and the chief minister, for you lead the core for change for the rest of Malaysia," said the Permatang Pauh MP.

"I am a Penangite, and we have said ‘no’ to racism. In Penang, the CM is my boss and I make no apologies when I speak, whether in Kelantan, Johor or Sabah. I am proud to have a CM with an honest track record," he said to loud applause.

Earlier, roads around Padang Kota Lama were lined with cars, and many were forced to park their vehicles about 1km away, walking to the ceramah venue to avoid a traffic build up.

As many parked their vehicles outside legal parking spaces, traffic police left scores of summons on the cars, which were later collected by Lim's political secretary Ng Wei Aik, who plans to see the authorities about it.

Upon arrival at the field, participants were greeted by white canopied stalls housing several state agencies which were set up before 4pm in conjunction with International Women's Day.

Apart from visiting the stalls, people were entertained by several local performers including pro-Pakatan singers like Yassin, who belted out pro-reformasi songs to the delight of many sitting on the grass waiting for the ceramah to start.

By 10pm, a DAP member on duty came to inform reporters that 1,000 T-shirts had been sold, saying that the party's merchandise are still available at the stalls, where PKR and PAS also set up theirs.

A carnival-like feeling filled the air as the field was set against the backdrop of the brightly lit colonial type Town Hall and Penang Municipal Council buildings.

But Penang did not forget the eight policemen who perished in Lahad Datu and Semporna when all were called to observe one minute of silence for the fallen heroes.

"If you feel good, give us the vote," the CM told the crowd, reminding them that there would be a peaceful transition of power if Pakatan were to seize Putrajaya in the coming polls, which must be called by June.

"We won Penang in 2008; we took over peacefully," he added, requesting the crowd to display Pakatan flags in their homes as a sign of support for the coalition to retain the state.

He then spoke about public transport systems, including the tram and monorail promised by the BN government, expressing doubt that it would ever happen since the ruling coalition had failed to fulfill its promises even when ruling the state before 2008.

“Did Prime Minister Najib Razak do it? No. We must wait until Anwar becomes the 7th prime minister to have it implemented,” said the DAP secretary-general.

The crowd cheered, not overwhelmingly though, when he touched on the RM6.3 billion four part integrated road system and undersea tunnel project for Penang, which would ease traffic congestion and link the island to Butterworth.

Lim then asked the most overused question of recent times, made famous by Najib in Penang during the BN’s Chinese New Year open house at the Han Chiang field on Feb 11: "Are you ready for Pakatan?"

Thrice he asked to a resounding 'Yes' each time from the crowd.

He was mocking Najib, who had received a 'No' when he asked if the crowd was ready for BN while the PM was to call Korean superstar Psy (real name Park Jae-sang) on stage to perform his global hit 'Oppa Gangnam Style' to a crowd of 30,000.

At midnight, the event ended on a peaceful note, though policemen and the state's security volunteer corps guarded the stage area closely while several FRU trucks were on stand-by.

Event organisers were cautious as just hours earlier, a group claiming to be NGO representatives tried to barge into the state administrative offices in Komtar (level 3) demanding to meet Lim.

Although the situation appeared calm, municipal officers on duty told Malaysiakini that they had spied 13 men whom they claimed were the same NGO members blending with the crowd to observe the event.-malaysiakini