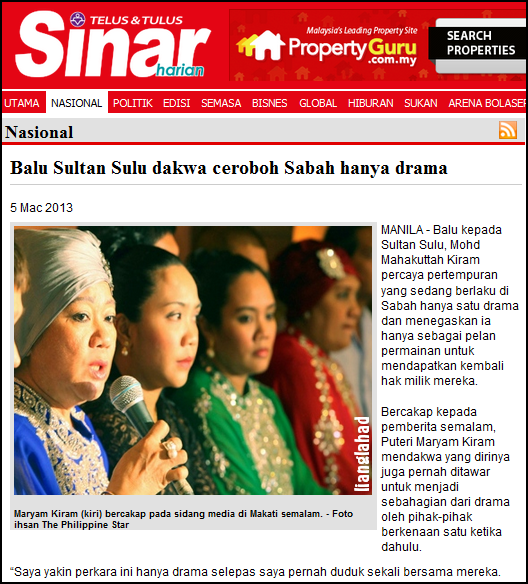 The widow of the late Mohd Mahakuttah Kiram, the 34th Sultan of Sulu, believes the fighting in Sabah is mere “drama,” and says it is not part of their game plan to pursue their proprietary rights.

Speaking to reporters yesterday in Makati, Princess Maryam Kiram offered herself as an emissary to the parties concerned, as she has been doing in the past.

“I am confident, after I sat with them to clarify their concern,” she said. “We will be willing to come to the negotiation table to settle all matters for the good of all concerned. A win-win solution can be arrived at.”

Maryam did not elaborate on the “drama,” but said the media are making up stories.

Claiming to represent the sultanate of Sulu, Maryam said she has been in contact with the members of the royal family and that she had set up the Royal House of Sulu Kiram Foundation Inc.

Maryam said she has been talking with Malaysian officials and an agreement was already made regarding the increase of the rent  for Sabah. Read here.

Fears linger in Semporna although fighting is over...

Although the gunfight at Kampung Sri Jaya Simunul in Semporna ended on Sunday night, fear still lingers over the coastal village.

Most of the residents have left to avoid the possibility of another, and larger, intrusion by foreign militants.

Villagers yesterday loaded their household goods and furniture, including sofas and television sets, onto 4WD trucks and small lorries to be sent to their relatives' homes, with whom they plan to stay temporarily.

A few had in fact started packing their bags shortly after the first shots were heard on Saturday.

They were worried about their safety, and true enough, a 24-hour gunfight ensued, with many of them remaining uncertain about the situation as rumours began spreading around the village.

One resident, Abdul Wahab Hakim, said intruders were still hiding in a house in the village, a settlement built on stilts above the sea.

"Police told us the intruders were hiding in the house and nobody was allowed to get close to it as the fear is that the men are armed," Wahab told Malaysiakini when interviewed at the entrance to the village yesterday evening.

"We understand that the militants are still here. We don't know which houses they are hiding in, but we know that they are still around.

"The perpetrators are a large group, and what happened here just involved a small group, so we are afraid that the rest of them will also barge into our village again," Sani said.

Kampung Sri Jaya Simunul, about 2km from Semporna town, is home to about 300 families making up some 3,000 people, according to locals.

Mohd Nazri Dranam, 18, who had reached home after a futsal game with his friends on Saturday, said he was shocked to hear several gunshots just outside his house minutes after he returned.

Nazri said the gunshots were fired just 10 metres away from his home and that this had really frightened him.

The Form Six student, who lives with his aunt and grandmother, said 10 minutes later, someone knocked on the door and told them to leave the village. The trio have moved in with relatives living nearby.

Semporna Umno Youth chief Mohd Azis Jamman, who visited the village yesterday, insisted that there was no police directive for the villagers to evacuate.

In a text-message to Malaysiakini yesterday, Azis claimed that the villagers were just taking precautions by moving out.

"If you ask the villagers, they might give you different reasons as to why they are leaving. Some might say they are afraid, some might say they fear someone will burn down their village... "But these are all rumours, which makes them afraid of their own safety," Azis said, adding that the people could move about freely in the area and that there were no police roadblocks.

"But it doesn't mean (that) the police are not on guard. Just this (yesterday) morning, the police were on helicopters, guarding from the air. Police on boats are guarding the sea, but the villagers are advised to be cautious always," he added.

IGP: Semporna has returned to normal

The gunfight at Kampung Sri Jaya Siminul on Sunday resulted in the death of 12 people. The police suffered six casualties, while the other six were foreign intruders.

The police said they were ambushed when entering the village. Inspector-General of Police Ismail Omar has since declared that the situation in Semporna has returned to normal.

Villagers said the corpses of the intruders were removed by the police around 3pm yesterday - two days after the gun battle.

Bloodstains were spotted at and near the places where the bodies were found.

Umno's Sani claimed that a police officer was shot dead first after he found heavy weapons hidden in the village, but Sani did not know how the police discovered this.

Semporna was a ghost town yesterday afternoon, with most of the shops closed.

The town is about 150km from Kampung Tanduo, where an estimated 100-300 people have been encircled by Malaysian police and soldiers since landing by boat from the Philippines on Feb 9 to claim the area for their leader, the Sulu sultan.

The town is notable as a stopover destination for tourists heading to Sipadan Island, a world-renowned dive site.

A number of shops were open yesterday morning, but all were closed around noon, after talk spread that the intruders would attack the Semporna police station.

All government agencies stopped operations yesterday and the Education Ministry has ordered schools to be closed for three days.-malaysiakini