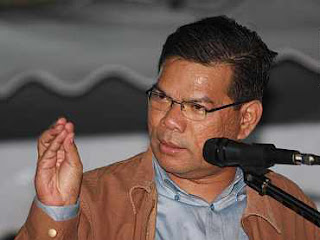 
Suaram’s French lawyers are likely to brief MPs on the facts of the Scorpene inquiry in Singapore rather than in Malaysia as originally planned, said opposition leader Anwar Ibrahim.

This, he said, is due to fears that the lawyers may not be permitted entry into Malaysia, as one of them William Bourdon had been declined entry into the country before.

Hence, there is a likelihood that the session will be held in Singapore possibly in November, Anwar (right) told Malaysiakini after delivering the keynote speech ‘Does the Arab spring have the potential of becoming a Muslim spring?’ in Paris yesterday.

He was receiving an award conferred by the Association of Muslim Social Scientist (United Kingdom) Lifetime Achievement Award 2010 for distinguished service in politics and economic thought, the promotion of the cause of good governance, and commitment to the principles of freedom, tolerance and justice.

Yesterday Anwar confirmed that the lawyers William Bourdon and Joseph Breham had agreed to come to Malaysia to explain details of the inquiry to members of the Dewan Rakyat.

"We met them today at their office and they have agreed to come and explain the ongoing french judicial inquiry to the Dewan Rakyat members," he told Malaysiakini yesterday at Cercle National des Armees Saint-Augustin.

Previously in July this year, Bourdon was deported by Malaysian authorities for allegedly misusing his social visit pass for other purposes, while both lawyers were later denied working permits to visit Malaysia in their capacity as Suaram’s lawyers.

Suaram and the opposition have accused the government of a campaign of persecution and harassment against the NGO for raising the alleged corruption in the French courts, although the government maintains that the deportation and denial of visas were according to the law and not prejudiced.

Suaram had petitioned French courts to open an inquiry into alleged corruption over the Scorpene purchase after the country’s government and law enforcement refused to investigate the matter.

Under French law, the judiciary itself can commence investigations, and a French company giving kickbacks to foreign governments to secure contracts is considered a crime.

Meanwhile during his speech, Anwar stressed that for a Muslim spring to happen, the states in the Middle East and other Muslim majority countries must establish constitutional democracies, not just in name but in reality.

"First and foremost is the holding of free and fair elections to ensure the legitimacy of power," he said.

He added that for a country to be considered a real democracy, it must adhere to the rule of law, judiciary independence and have gender equality and freedom of the press.

"For example in Malaysia, although I am the leader of the opposition coalition, I do not get one minute (of airtime) on television. What is this democracy?" he said.

“And Malaysia is regarded as a vibrant moderate Muslim democracy,” he added sarcastically.

He said that in Malaysia, the government fearing an Arab spring on their hands, has gone on overdrive to harass pro-freedom and pro-democracy groups.

"The government-controlled media are employed to carry stories and articles attacking them, saying that these non-profit organisations are hell bent on attempting to destabilise legitimate governments and replace them with client proxies," he added.

He also went on to criticise Western countries who question if it is possible to have democracy in a Muslim-majority country.

"In fact, we do not have a lot of debates in Indonesia or Malaysia whether Islam and democracy is compatible, or whether it is possible to have fair elections. It is always in Paris, Washington, London that we have these debates," he said.

Anwar said Islam and democracy are not mutually exclusive, but it is perhaps a concept that the West might have problem grasping, as perhaps it did not fit into the Western philosophy of democracy.

He added that foreign policies in the Western world are also ambivalent as demonstrated by US president Barrack Obama's historic speech in Cairo made shortly after taking office.

Anwar said, "But once the euphoria (of Obama’s victory) died, it became clear that the United States was not going to do anything differently, certainly nothing different that would upset the status quo needed to sustain the sensitive Arab-Israeli equation in the region.”- malaysiakini