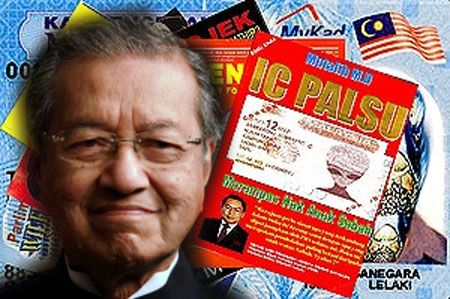 Housewife Fawziah Abdul wants to thank former prime minister Dr Mahathir Mohamad for making her a citizen 10 years after she illegally slipped into Borneo from the southern Philippines in search of a better life.

The 50-year-old lives on the outskirts of Kota Kinabalu, the capital of Sabah, where her tin-roofed shack jostles for space with more than 1,000 others in a slum where children play beside heaps of rubbish.

She is hopeful that her three children will get a new home and identity cards if she votes for the government again.

With a general election due within seven months, the 13-party ruling BN coalition is banking on Sabah and neighbouring Sarawak state on Borneo island to prolong its 55-year grip on power.

But its support in the two Borneo states, which account for a quarter of parliament seats, is showing signs of slipping.

A large presence of Muslim immigrants, like Fawziah, has fuelled complaints of government discrimination against Christians who have also been a bedrock of government support.

Fawziah said she was a beneficiary of a secret plan said to have been approved by Mahathir that has helped fuel a five-fold surge in Sabah's population since the 1970s and turned it into a vote bank for the ruling coalition.

"I am part of Project Mahathir," she said, referring to the plan. "I was told to turn up at an office with two photographs and some money," added Fawziah, who showed her identity card
that lists her as a Sabah-born citizen.

Pakatan may win 10 seats in Sabah

Without support in the two eastern states, the ruling coalition would have lost power in the last general election, in 2008, when a resurgent opposition won a majority of votes on peninsula Malaysia. Now that support looks fragile.

Residents of Sabah complain about competition from Filipino and Indonesian migrants for jobs in the oil and gas-rich region, whose revenues are mostly channelled to the federal government and where one in five people lives on less than US$1 a day.

Christians, mostly members of indigenous groups such as the Kadazandusun in Sabah and the Dayaks and Ibans in Sarawak, once made up nearly half of Sabah's population but now form less than a third of its 3.2 million people.

But they can still give a potentially vital boost to the opposition, which won a majority of votes in mainland Malaysia in 2008 but only got three of 56 seats in Sabah and Sarawak.

The election is expected to be the closest in the former British colony's history after the coalition lost its two-thirds majority for the first time in 2008.

This is partly due to Christian, Buddhist and Hindu minorities in the mostly Muslim country abandoning the coalition, complaining of discrimination over issues such as the airing of Islamic programmes on state television.

rnold Puyok, a political scientist at Universiti Teknologi Mara Sabah, says the frustration could translate into votes for the opposition led by Mahathir's former deputy, Anwar Ibrahim,
which could pick up at least 10 seats out of 25 in Sabah.

Opposition strategists say they need to win an extra 10 seats each in Sabah, Sarawak and mainland Malaysia to win the election with a simple majority of 112 seats.

The opposition - a coalition of Borneo parties and a mainland alliance that campaigns for greater transparency - won 15 seats from the ruling bloc in Sarawak state elections for its
best showing in 24 years. It got votes from indigenous Christians as well as from the ethnic Chinese minority.

As Christian frustration grows over Muslim migrants, churches are becoming more vocal. Malaysia's largest evangelical group held a 40 day-fast last month, which included prayers for the resolution of what they see as the immigrant problem.

The National Evangelical Christian Fellowship also held prayer meetings across the country for Malaysia Day on Sept 16 - a holiday marking Sabah and Sarawak's entry into Malaysia 49 years ago.

The Borneo states agreed to join Malaysia on condition that religious freedom as well as the protection of native lands and cultures were guaranteed.

"There are quite a few unhappy Sabah people. Sabahans do not usually show it openly, they are doing it through prayer," Stephanie Rainier, a Kadazandusun among 7,000 worshippers at a stadium in Kota Kinabalu, said of people's frustration.

"They are taking over businesses. They are everywhere," she said of migrants.

The ruling coalition can still rely on an election system that is skewed in its favour, particularly in Sabah and Sarawak.

Seat allocations are weighted heavily in favour of rural constituencies with smaller populations compared with urban centres that are more likely to favour the opposition.

But in an apparent sign of concern over his coalition's chances in Sabah, Prime Minister Najib Razak bowed to pressure in June and formed a royal commission of inquiry into the granting of identity cards to illegal immigrants.

A survey by independent pollster Merdeka centre found that immigration was the number one concern among Sabah voters.

The survey also found scepticism over Najib's motive for announcing the inquiry, with only 46 percent of respondents believing it was a genuine attempt to address the problem.

"Only because there is an election around the corner, the government decides to do an inquiry," said Wilfred Bumburing, a lawmaker in Sabah who quit the government coalition over its handling of the immigrant issue.

Government sources say the inquiry panel has yet to meet due to opposition from the dominant party in the ruling coalition, Umno, that controls Sabah, and from the still influential Mahathir.

While repeatedly denying links to Project Mahathir to media, Mahathir said in his blog that the Filipinos and Indonesians were qualified to become citizens as they had stayed in Malaysia for more than a decade and spoke the Malay language.

The influx of Muslims, who can largely be counted on to support the ruling coalition, would appear to bolster the government. But despite that, some Christians worry about what they see as Muslim authorities' growing intolerance.

An example, some Christians say, is the unease over Christian congregations in Sabah and Sarawak using the Arabic word ‘Allah' to refer to God.

While these Catholics, like their brethren in Indonesia, have used ‘Allah' since converting to Christianity in the 19th century, the government says the use of the word is subversive and is aimed at converting Muslims.

Mindful of votes, Najib has not stopped Christians in Borneo from using the word in prayers. But the government has appealed against a court ruling that allowed a Catholic newspaper to use Allah in its Malay-language editions in Borneo.

"I hope there is tolerance. In reality, not publicly, subtly, you can feel there is some erosion of religious tolerance," said Bishop Cornelius Piong after Sunday Mass in the rice-growing region of Tambunan.

"If there is no balanced leadership, people will think and they will decide," he said, referring to the election. - Reuters, malaysiakini 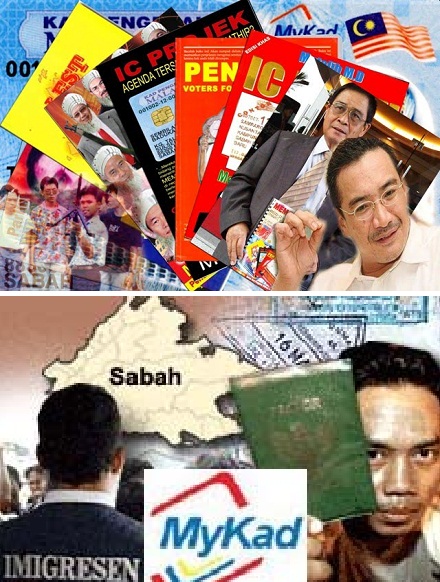