Hassan Musang was never prepared to go for trial...

Former inspector-general of police Musa Hassan was never prepared to go for trial in his defamation suit against opposition leader Anwar Ibrahim in the first place.

This matter became apparent when Musa had problems of finding his main counsel after Hisyam Teh Poh Teik and Ghazi Ishak said they could not appear for him on that day.

Furthermore, Musa’s witness list was seen as incomplete before the start of the trial as besides the former IGP testifying as the claimant, he had placed former Kuala Lumpur CID chief Mat Zain Ibrahim as his second witness.

Mat Zain told Malaysiakini that he was surprised that Musa had listed him as his second witness.

“I was never subpoenaed nor informed by Musa or any of his counsel about his intention to call me or record my statement to prepare the witness statement. I believe what Anwar’s counsel said is right, that they did not seek a settlement.

“It was Musa who lied to the public and decided to withdraw. Musa never wanted the case to go on to begin with,” claimed the vocal Mat Zain, the former black-eye case investigating officer.


Anwar’s counsel N Surendran had told Malaysiakini on the day of the hearing that Mat Zain was supposed to be their witness, before learning that Musa had applied for the former KL CID chief to be his much earlier.

Mat Zain wanted action to be taken against Musa and present attorney-general Abdul Gani Patail, whom he accused of fabricating evidence related to the black-eye incident.

It was reported that Musa withdrew his suit which he filed in 2008, after Anwar lodged a police report against him, Abdul Gani, Mat Zain and Kuala Lumpur Hospital doctor Abdul Rahman Yusof on July 1, 2008.

Malaysiakini obtained letters from Musa’s lawyers on the application to seek a postponement of Tuesday’s trial following Hisyam and Ghazi’s inability to come to court for the trial. However, Kuala Lumpur High Court Judicial Commissioner Asmabi Mohamad did not want a postponement.

This portal also received a copy of the witness list from Musa’s lawyers which states Musa and Mat Zain’s names as two of the witnesses. The remaining two are unnamed officers from TV3 and the Malaysian Communication and Multimedia Communications (MCMC).

Normally in civil court cases, witness statements are exchanged before the trial starts for both sides to prepare the case.

Commenting further on Musa’s decision to withdraw, Mat Zain believed Musa may have run scared and thus withdrew, but may have wanted to create the impression that it was Anwar who had suggested the settlement.

“If he was prepared to lie before the public openly such as yesterday, he must have lied about Anwar or exaggerated the evidence against Anwar when Musa briefed Dr Mahathir Mohamad in 1998 which led to Anwar’s sacking, and later being charged and convicted on allegations of abuse of power.”

Mat Zain said Musa’s withdrawal also does not absolve him or Abdul Gani’s wrongdoings in fabricating evidence in the black-eye incident.

Anwar, Mat Zain said, is not a person of authority to say who remains accused and who should be probed further as the task is left to the police or the investigating officer (IO) of the black-eye case to decide.

“If Musa feels that his role in the black-eye incident was wrongly interpreted, than he should challenge the IO and not the victim. For me, it is Musa who helped Abdul Gani and the former AG, the late Mohtar Abdullah, to destroy police credibility from which it had yet to recover until today.

“Musa betrayed the force. It was based on this fabricated medical report that the AG ‘overturned’ police findings in the black-eye investigation to ‘self-inflicted injuries’ instead of assault by the former IGP Abdul Rahim Noor.  Based on the AG’s distorted statement dated Jan 1, 1999, the cabinet decided to establish the royal commission of inquiry (RCI),” he said.

Will Anwar really push for a tribunal?

Mat Zain said Anwar has stated that he is going to push for a tribunal against Abdul Gani.

“Let’s see whether Anwar (second from left, front row) meant it or is this just another political statement.

He must realise that what Abdul Gani did was not an offence or offences against an individual such as assault where the person assaulted can forgive and forget.

“Abdul Gani's offences are against the state and public justice. It is not for Anwar to forgive or forget what Gani had done.

Since Anwar has said that he is going to push for a tribunal then let’s all wait and see whether Anwar will mobilise his strength as the opposition leader to fight for and uphold public justice for the sake of all. Or whether he is willing to fight for his own personal survival instead.”

Musa and Abdul Gani were probed by the Malaysian Anti-Corruption Commission (MACC) for abuse of power, where a three-member panel comprising former judges of the Federal Court and Court of Appeal were appointed.

The panel cleared the duo of any wrongdoing as had been announced by the de facto law minister Nazri Abdul Aziz. However, Mat Zain argued that the panel was not properly instituted and has no powers to decide the on AG’s conduct as they were appointed as deputy public prosecutors under direct control of the AG as stated in the Criminal Procedure Code.

“It’s not a question of who or what the panel members were when they were in service but what powers were given to them when they were appointed. There is no doubt each and every one of them  are most suitable and qualified to be appointed but they were never appointed as such for this exercise.

“I dare say the panel was never shown all the three reports made by Dr Abdul Rahman. The panel would not have cleared Gani and Musa had they been given the chance to look at those reports,” he said.-malaysiakini 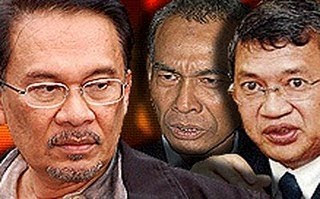