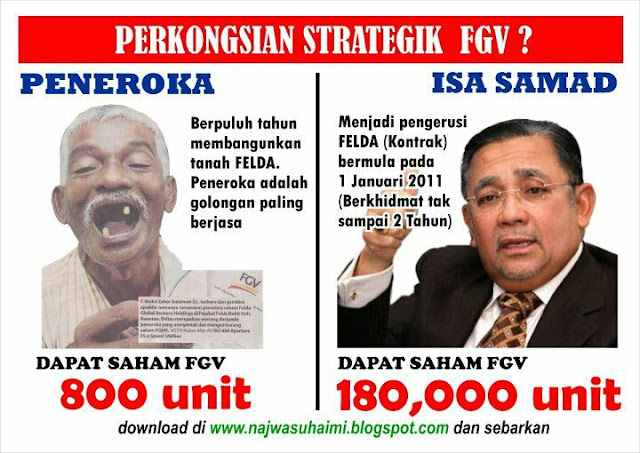 Why did unrelated person get 1mil FGV shares...

An Umno parliamentarian today queried the government why a person unrelated to Felda was allegedly given the pink form for one million shares in the recently-listed Felda Global Ventures Holdings Bhd (FGV).

“There is a guy in Sabah who has no connection with Felda, but he got a million FGV shares.

“This person has not contributed anything at all to Felda, not even politically,” Abdul Ghafur Salleh (BN-Kalabakan) (left) told the Dewan Rakyat during Question Time today.

He revealed this in his supplementary question to Deputy Minister In the Prime Minister’s Department Ahmad Maslan, who fielded his original question on the criteria and groups eligible for FGV pink forms and blue forms.

The Kalabakan MP asked Ahmad to give him an answer in writing on the matter, including the list of all who has been given FGV pink forms.

The deputy minister agreed, although he said that as far as he knew nothing like what Abdul Ghafur said has happened, but posited that it may be a misunderstanding.

“The Sabah state government is given five percent of the FGV shares. That is a substantial amount.

“I presume that this is where the confusion may lie, as it may be the Sabah government that got those shares,” reasoned Ahmad.

Earlier the deputy minister had answered that a total of 112,635 individuals were issued blue forms, while 22,357 others received pink forms for the FGV initial offering, which was the second largest IPO in the world after Facebook.

The blue form recipients are all Felda settlers who received 800 shares each.

Ahmad explained that pink forms were only issued to three groups of recipients:
However, all the above must have held their tenure with the group for at least a year at the time of the IPO, to be eligible for the pink forms.- malaysiakini

Deputy minister Datuk Ahmad Maslan was left red-faced today when he failed to answer in Parliament a Sabah Umno MP’s question on why a person with no link to FELDA Global Ventures Holding (FGVH) had received a pink form for one million shares set aside exclusively for the plantation giant’s workers.

“There is a guy in Sabah who has no connection with FELDA, but he got a million [FGVH] shares.

“This person has not contributed anything at all to FELDA, not even politically,” Kalabakan MP Datuk Abdul Ghapur Salleh(pix,above) said during Question Time, before asking Ahmad to explain.

The deputy minister in the Prime Minister’s Department fumbled in his reply, saying there may have been a misunderstanding.

“The Sabah state government is given 5 per cent of the FGVH shares. That is a substantial amount.

“I presume that this is where the confusion may lie, as it may be the Sabah government that got those shares,” he told Abdul Ghapur.

But the Sabah Umno lawmaker was unappeased and demanded Ahmad provide a written reply to his question, and to include a list of those who had been given the FGVH pink forms

Ahmad had earlier explained that the forms were given out only to those who had worked or contributed to FGVH for at least one year at the time the palm oil giant debuted on Bursa Malaysia on June 28.

Eligible FELDA settlers and employees were given preferential options of 37 per cent in the initial public offering (IPO) at the retail price of up to 200.6 million shares, or 5.5 per cent, through blue and pink forms.

Under the blue form scheme, FELDA settlers were allotted 2.5 per cent while FELDA’s workforce was given three per cent of shares under the pink form scheme.

Ahmad told Parliament today that a total of 112,635 individuals had been issued blue forms, while 22,357 others received pink forms for the FGVH IPO.- malaysian insider