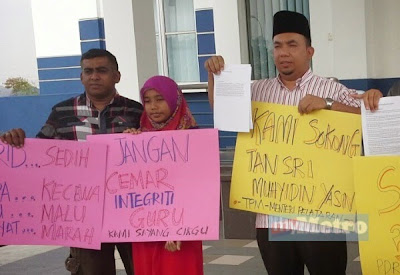 Idris Jala has become the first cabinet minister to openly speak out against the sedition charge against Universiti Malaya law lecturer Azmi Sharom.

Idris, who is minister in the Prime Minister's Department, appeared to break ranks with his cabinet colleagues, saying that the charge against Azmi was wrong.

Azmi Sharom (right) should not be charged for sedition. Academic freedom is required in pursuit of knowledge," he said in a series of Twitter postings today.

The minister, who is in charge of the country's Economic Transformation Programme, stressed that Malaysia must continue to pursue moderation.

"Constructive criticism and dissent should be allowed, as long as it does not create serious fault in the social fabric of our society," he said in another posting.

Idris is one of few ministers in the government who do not belong to any political party.

The Sarawakian has largely shied away from the political scene and has instead focused primarily on his administrative tasks.

The other party-less ministers are former Maybank chief executive officer Abdul Wahid Omar and former Transparency International president Paul Low, both of whom were brought into the government after the 2013 general election.

Azmi was on Sept 2 charged with sedition for expressing his legal opinion in an interview on the 2009 Perak constitutional crisis which saw the ouster of the Pakatan Rakyat-led state government by BN through a number of defections.

He is among several politicians and activists who have been charged under the colonial era law.

To date, at least 18 prominent individuals have either been probed, charged or convicted of sedition in recent months.- mk